The ride from Delfinopolis was about 480 miles. This is the second longest riding day I’ve have had so far on this trip and by far the furthest I’ve gone in a single day in Latin America. I was on the road by 0700 and didn’t make it into Brasilia until around 1800. I only took a short 15 minute break for lunch, so I was completely exhausted by the end of the day. One of the riders I had met at the BMW moto event lived in Brasilia and manages a chain of luxury hotels in this part of the country. My new friend, Jesus, had graciously offered to put me up free of charge for a few days in one of his hotels to see the city and relax for a bit. 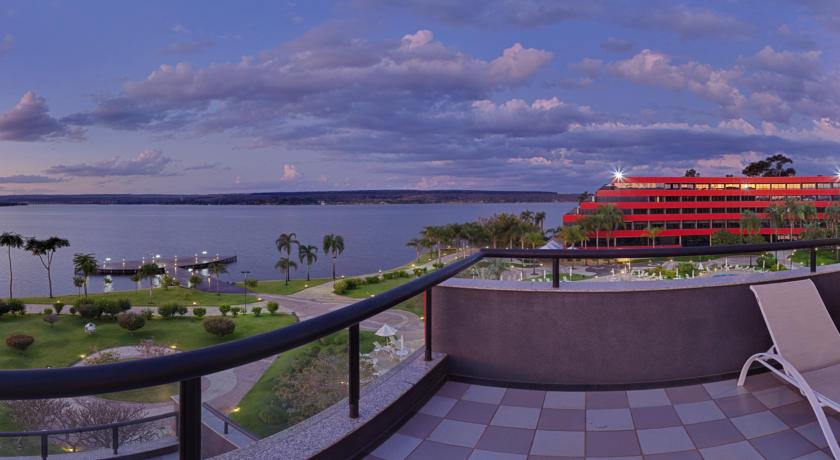 By the time I had settled into my hotel room I was feeling very tired.. a bit more than usual. I figured it was just from the long day and I would feel better in the morning. However, when I woke up the next day I felt terrible; the worst I’ve felt on this entire trip. My first guess was that I had eaten something bad yesterday during lunch and I had a bit of food poisoning. I ended up laying in bed all day feeling like crap and didn’t do much of anything. The next day I felt even worse with pain in the back of my eyes that was amplified by when I looked around. I also had a really bad headache. I did a little reading online and some of my symptoms (eye movement pain) matched up with Dengue Fever. South Central Brazil was marked as a hot spot on the map for Dengue Fever, so it’s possible I could have gotten it when I was in Delfinopolis. It’s spread through mosquito bites (just like Malaria) and I had certainly gotten a few of those over the last few days. After 3 days of feeling terrible and being stuck in bed, I was starting to feel better. It was just in time too…

Jesus had gotten a couple of free tickets to the Portugal vs. Ghana World Cup game, so we went to watch the game. Super cool. Thanks again Jesus. 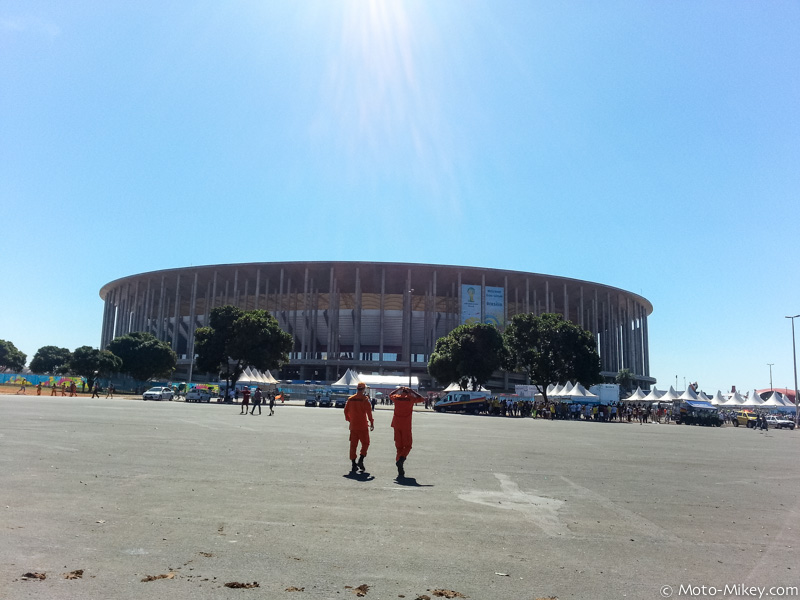 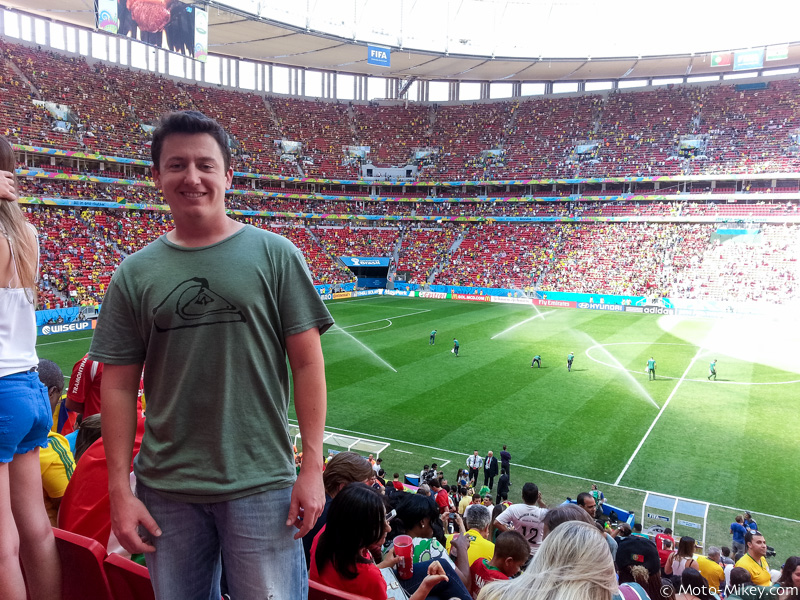 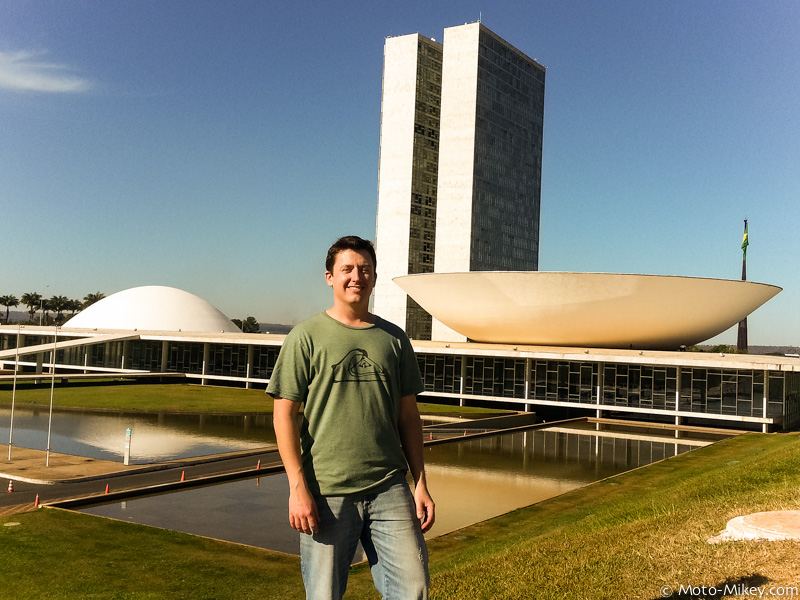 Jesus had also talked about my trip with someone and somehow a local newspaper had heard of my story and wanted to write a piece on me. Humm.. okay, that sounds interesting! After a brief 30 minute interview with Juliana, the journalist, she had everything she needed to write an article on me. There were no guarantees that the article was going to get published though.. that was up to her editor and boss. I found out a day or 2 later that it had in fact been published. Cool! I guess this is my 15 minutes of fame here in Brazil!?

Photo of the article. I got half of page 8 in the Jornal de Brasilia! 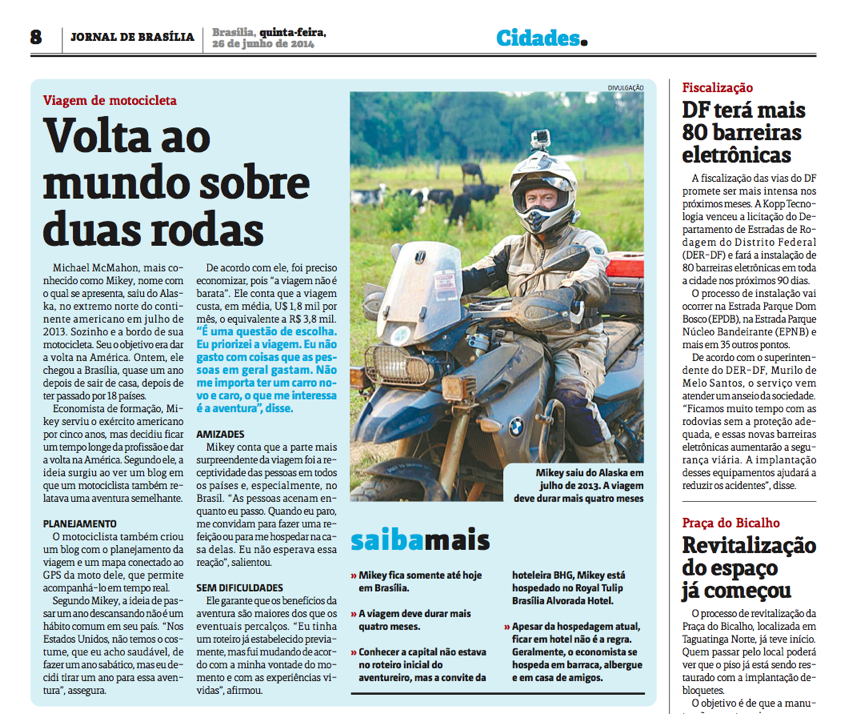 Here’s a link to the PDF file if you want to copy/paste the text from it to translate it: http://moto-mikey.com/wp-content/uploads/2014/07/Brazilian-Newspaper-Article.pdf

It’s nothing new that you probably don’t already don’t know about me or this trip.. just the basics such as where I’m from, when I started, where I’ve been, how I’m enjoying Brazil, etc… regardless, it’s still pretty cool.

After a few days of hanging out at a really nice 5 star luxury hotel in Brasilia, it was time to get back on the road. The next few days were gonna be blasting straight North towards the city of Belem and the start of the Amazon River.