Out of Colombia and into country #12 Ecuador; the middle of the world! We were up early and at the border before 0900 in an effort to beat the masses. Checking out of Colombia took less than 5 minutes and getting stamped into Ecuador took less than 2.. so far this border was a breeze.

However, getting the moto imported took nearly 2 hours! There was one (nearly incompetent) guy doing the import paperwork and it took him about 30 minutes per person.. really slow process and an unorganized line of people trying to squeeze their way to the front. Overall, probably the easiest border crossing so far but the Ecuador aduana process was a joke.

After the border crossing we went into the next town to find moto insurance since it’s supposedly required in Ecuador but isn’t sold at the border. We spent about 2 hours trying to find a place to sell us insurance but no where would sell us just a 1 month policy or was able to sell it for motos. We finally decided to continue on down the road to find it somewhere else. 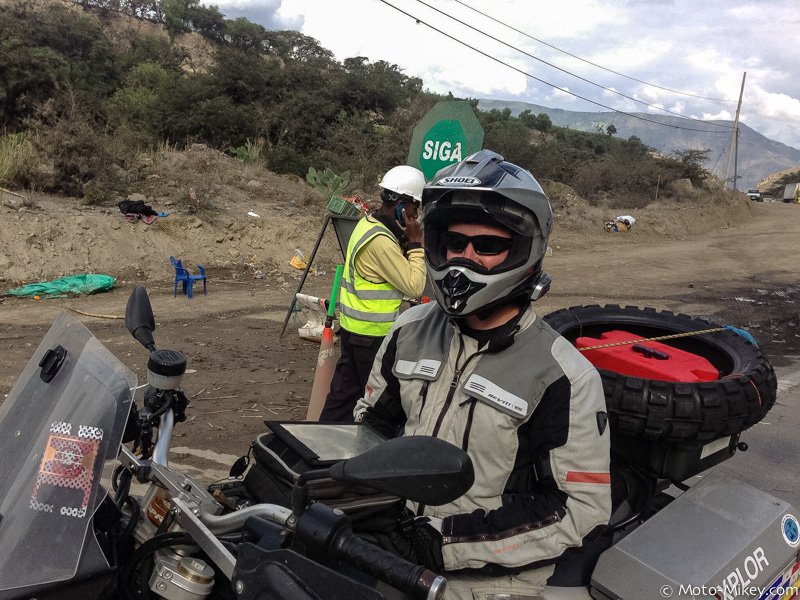 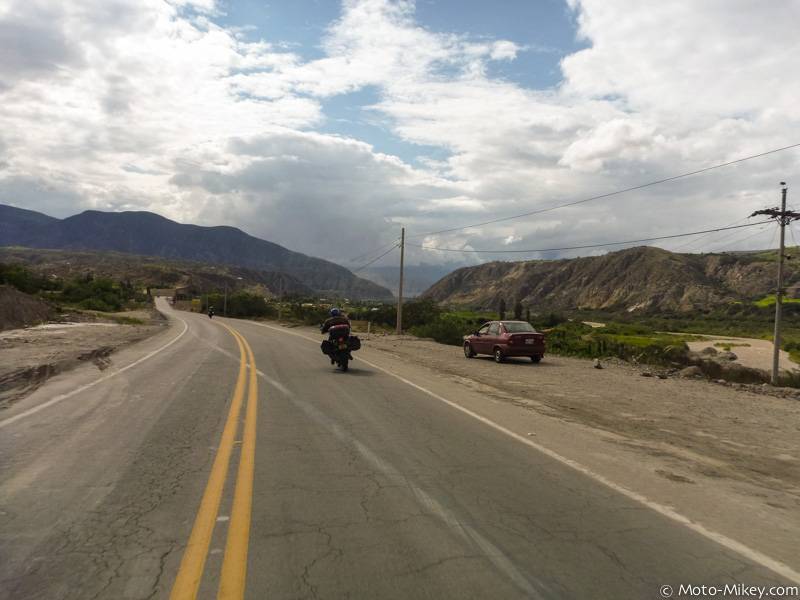 Since the border crossing and insurance search took longer than expected, there was no way we were going to make it to Quito today. We ended up stopping in an interesting little town called Otavalo for the night. It’s on a lake and has a cool looking volcano. 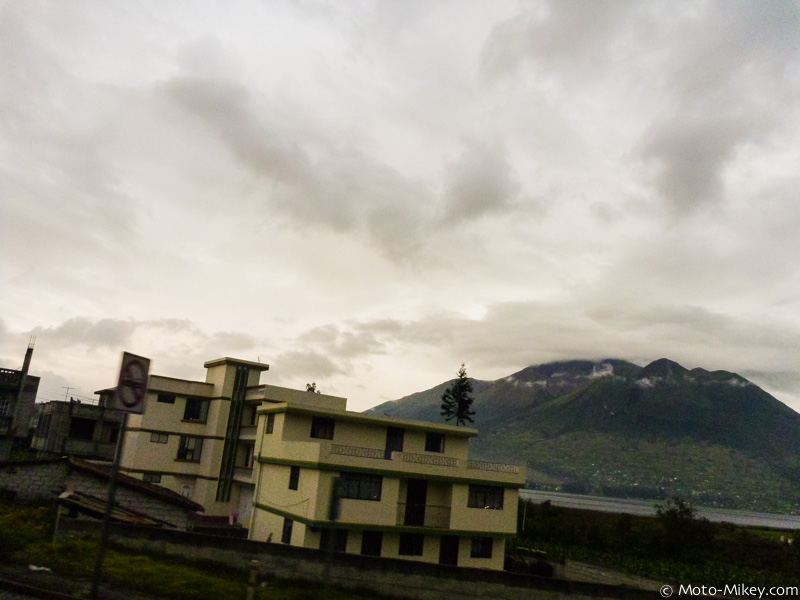 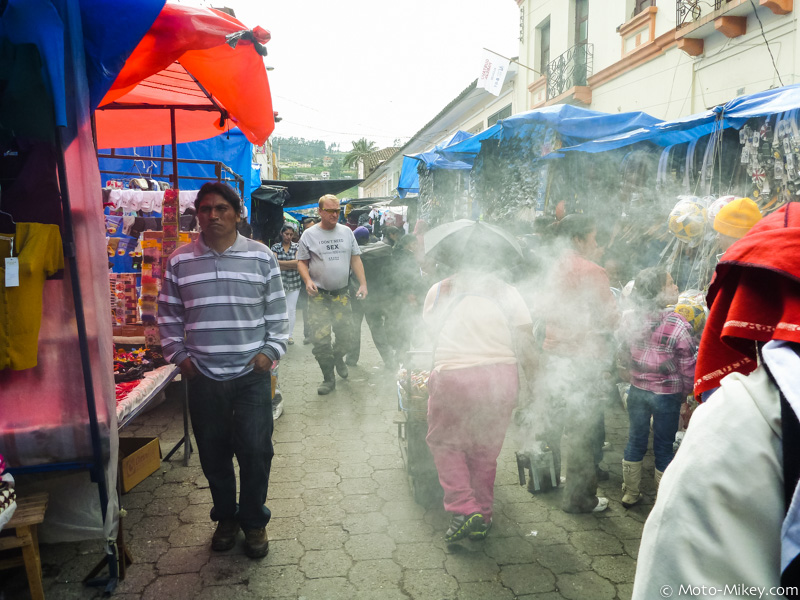 The streets are filled with vendors who setup shop all throughout the town. Everything is for sale from socks to snacks to roosters. If you can name it, it’s here for sale.. and you can haggle to your hearts content on the price with the locals. 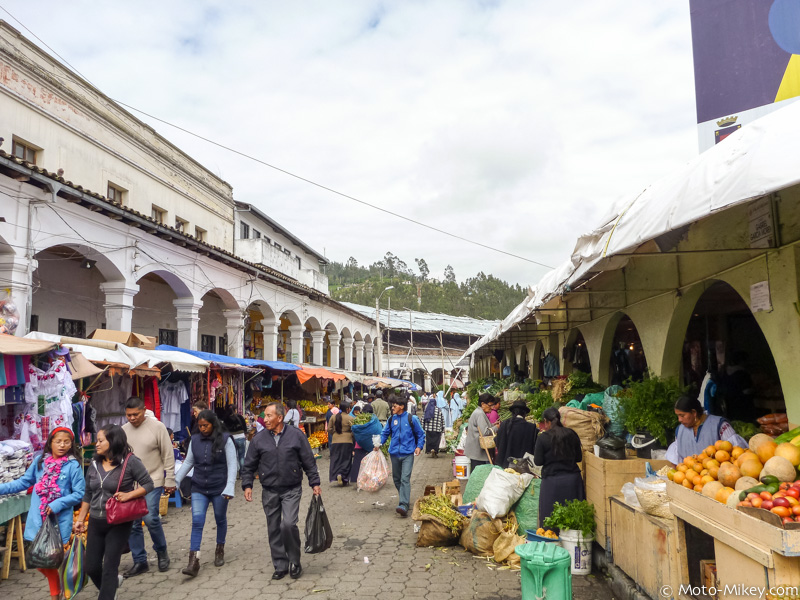 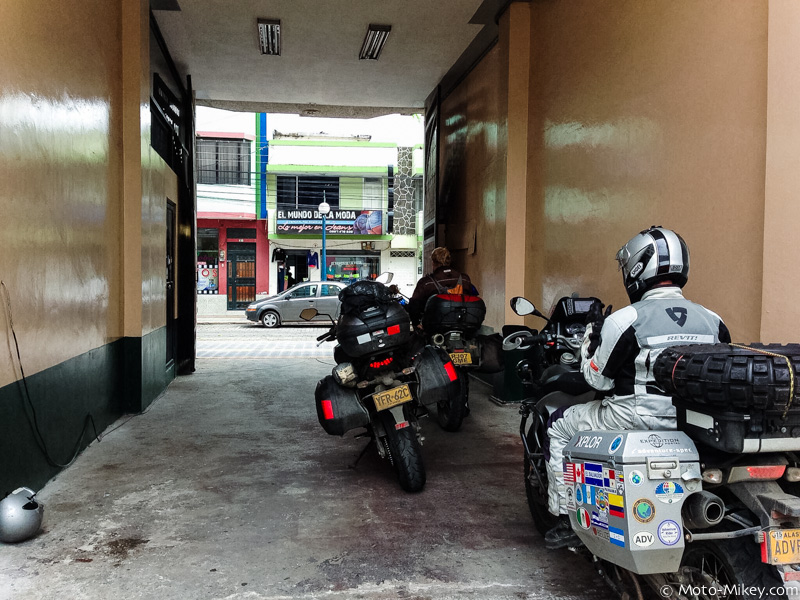 Outside of Otavalo we stopped at a lago which is supposed to be very scenic. It has 2 small islands in the middle of it. Maybe i’m a bit desensitized by some of the things i’ve seen over the last 5-6 months but I didn’t find it very impressive.. we did meet some Ecuadorians who were interested in out motos and trip.. always fun meeting the locals. 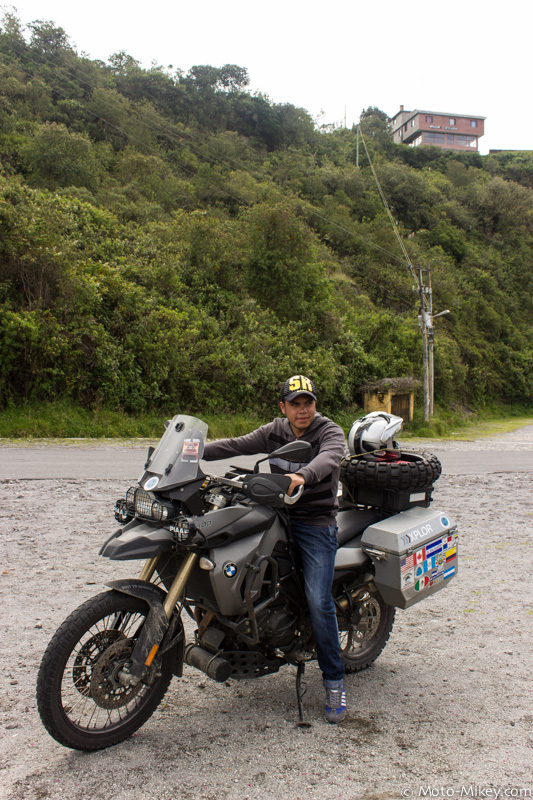 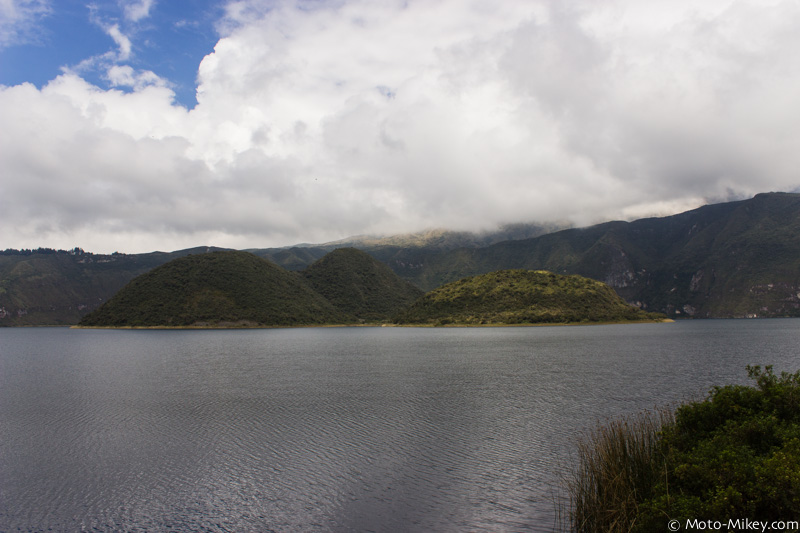 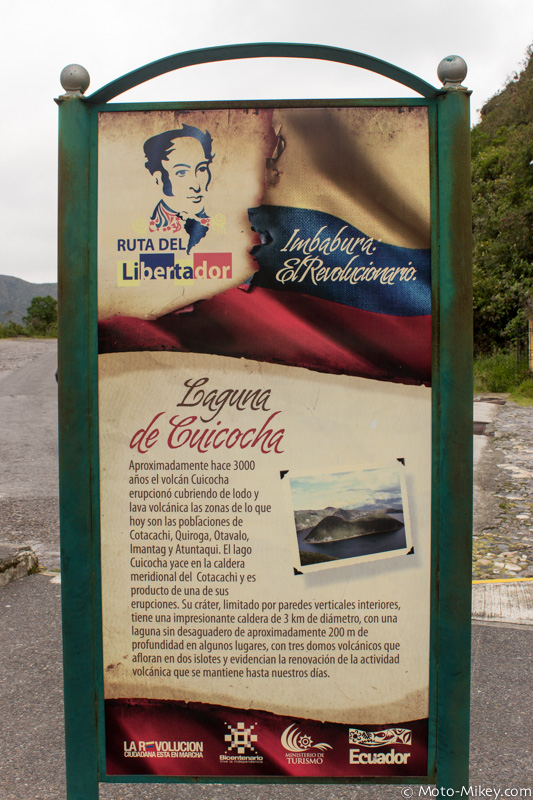 From here we headed South towards the Equator and the city of Quito. Along the way a bit more rain to keep things interesting. 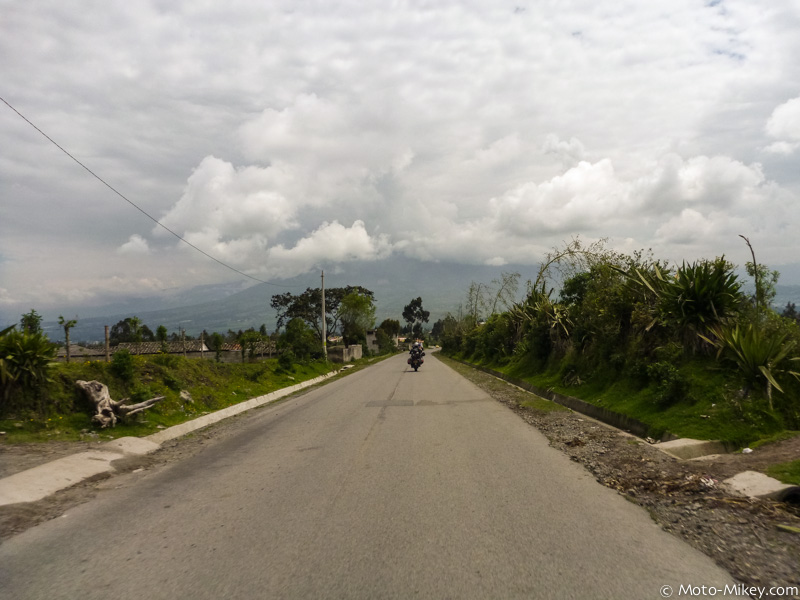 I am now officially in the Southern Hemisphere. I suppose this is some sort of milestone, right? 😎 At the equator is a cool monument called the Quitsato Sundial. 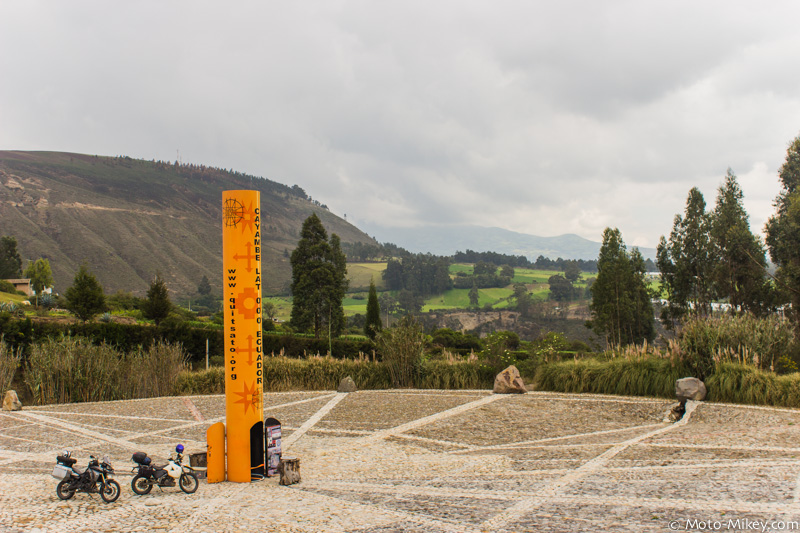 A short bit outside of Quito we stopped for lunch at a Pollo Asado (roasted chicken) joint. These places are very very common in Central and South America. I had a really good chicken lunch for around $2 including drink! 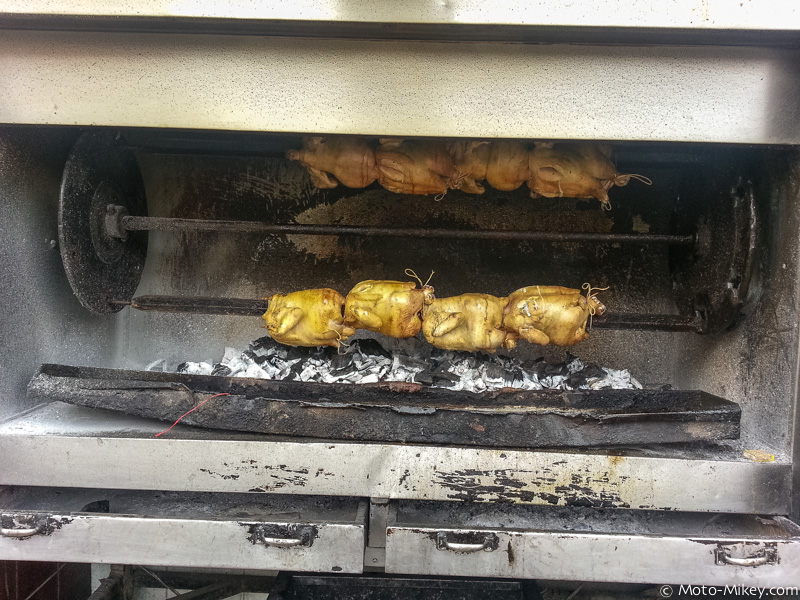 We rolled into Quito (after getting rained on again) and found the Casa Helbling Hostel. This is another place that is often frequented among adventure riders.. usually because few hotels/hostels have parking garages. Pulling into the hostel, we saw 2 other motos already here, one which belonged to Marc who I had met about a month on the Stahlratte. He is also riding to Ushuaia on a R1200GS with his wife, Nadia.

The plan is stay here in Quito for an extra day to rest up a bit and since tomorrow is a Sunday, everything is closed. We still need to find moto insurance and I need to find a new front tire. The climate here in Quito is much cooler than anywhere else I’ve been so far in Latin America. Sitting at an elevation of around 9300 feet means cool days and chilly nights in the low 40s. Our hostel has a fireplace which they burn every night, which I find very nice.. in fact i’m sitting here right now writing this next to a warm fire 😎