After breakfast at a local cafe, we headed into the park early this morning. It was surprisingly cold out.. 36F! We weren’t even at a significantly high elevation either.. weird.

Yellowstone is notable for all the geysers that are present around the park. Some erupt and I think others just vent hot steam. They’re all over the place. The most popular is of course Old Faithful Geyser. 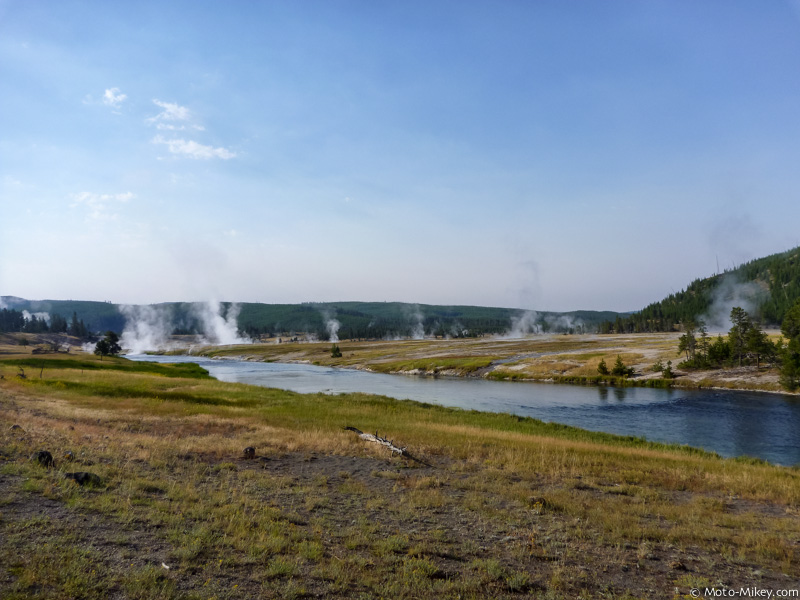 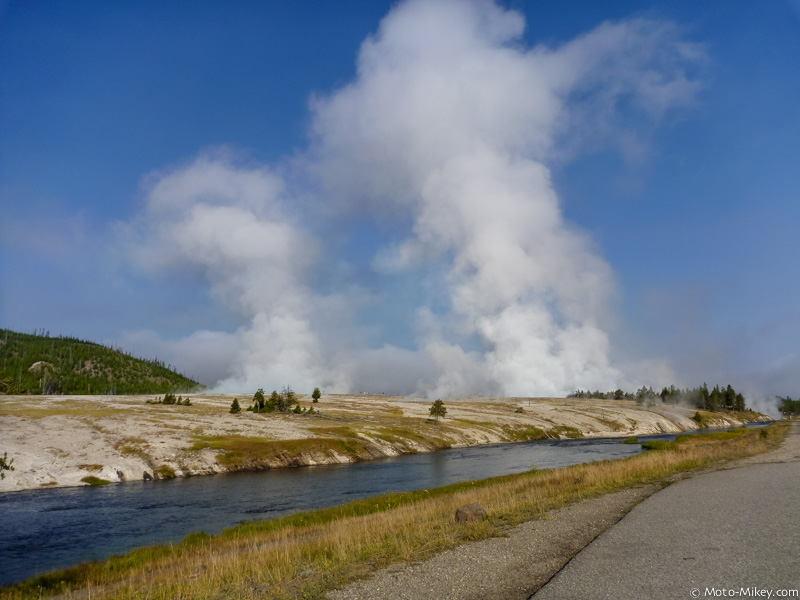 Old Faithful is so popular it has huge parking lots, a highway overpass exit (which is strange to see in the middle of a national park), a gas station, general store, health clinic and much more devoted just to this one geyser. It’s obviously the most visited attraction in Yellowstone.

It’s called Old Faithful because, well, it erupts pretty much on schedule and has been consistent over the years. Every 90 minutes she goes boom (not really a boom but you get the idea). We got there about 15 minutes before the next ‘scheduled’ eruption. There was already a large crowd gathering around.. easily hundreds of people here just for this single event which takes place every 90 minutes.

Sure enough, within 2 minutes of it’s scheduled eruption, she went off. It wasn’t really as spectacular as I had thought it would be but still cool none the less. Old Faithful Eruption; check that off the bucket list.

From Old Faithful, we rode towards Yellowstone Lake, which is where we parted ways. I was heading North East to ride Chief Joseph Highway and then eventually towards the East Coast. Peter and Johanne were riding West into Idaho and eventually California.

Peter and Johanne, it was a pleasure to have ridden with you again. I hope you enjoy the rest of your time in the US and hopefully we’ll ride again someday. 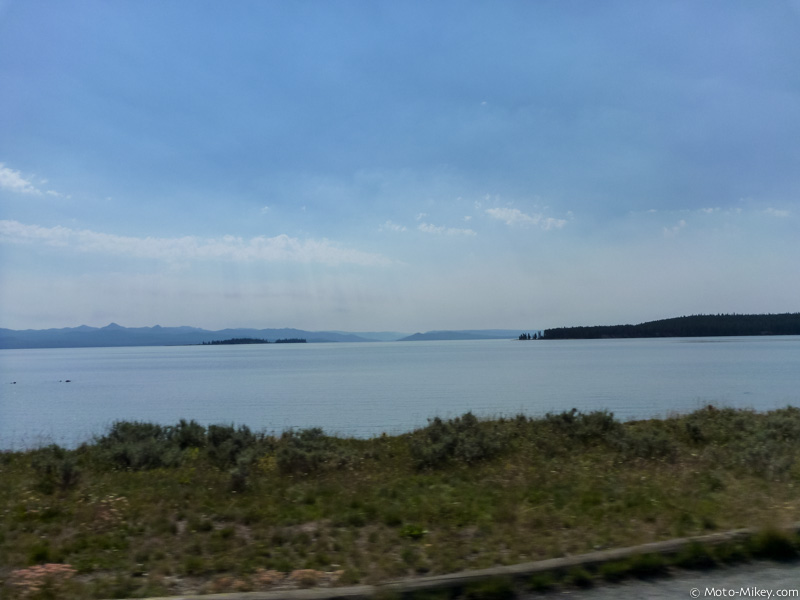 Yellowstone is certainly a place that I think everyone one must see sometime in their life. It has some amazing wildlife and natural wonders found no where else. However, this does have it’s downsides.. You’re not the only one who wants to see this place. Millions of other people come here every year to see the same things you want to see. That means there’s lots of traffic and it’s very often slow going throughout the park. If you want to come here, plan on spending at least 3-4 days to see the park.. and that’s just to drive around it and occasionally stop and see the sights. To fully see the park would take weeks.

What frustrated me the most was that people would just stop their car in the middle of the road and take pictures with absolutely no regard for holding up traffic. If there was an animal on the side of the road, you could expect 20-30 minute delays since every passing car would stop (and sometimes get out) to take a picture. In a park this massive with as much wildlife as it has, it results in taking a long time to go a short distance. Okay.. enough ranting. It is beautiful here.. 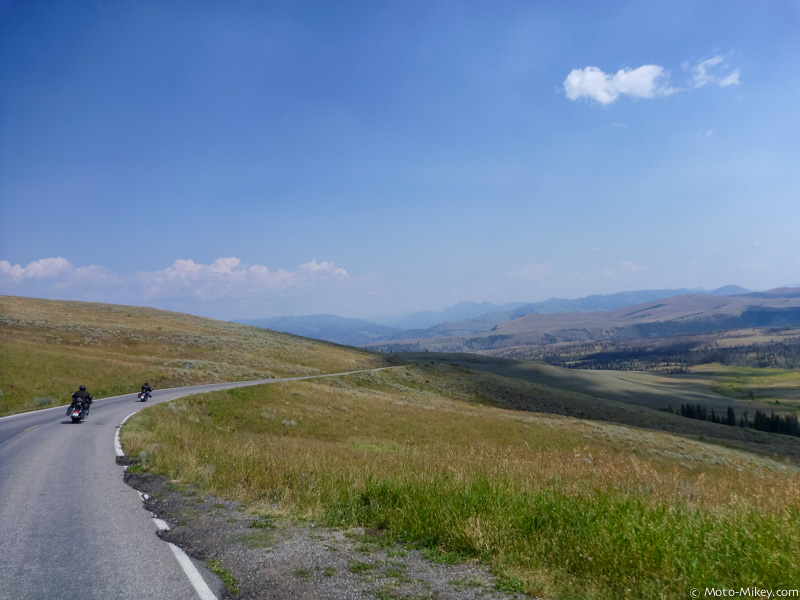 Once out of the park, I headed towards the Chief Joseph Highway. This is another scenic highway with an awesome section of twisties in the middle of it. 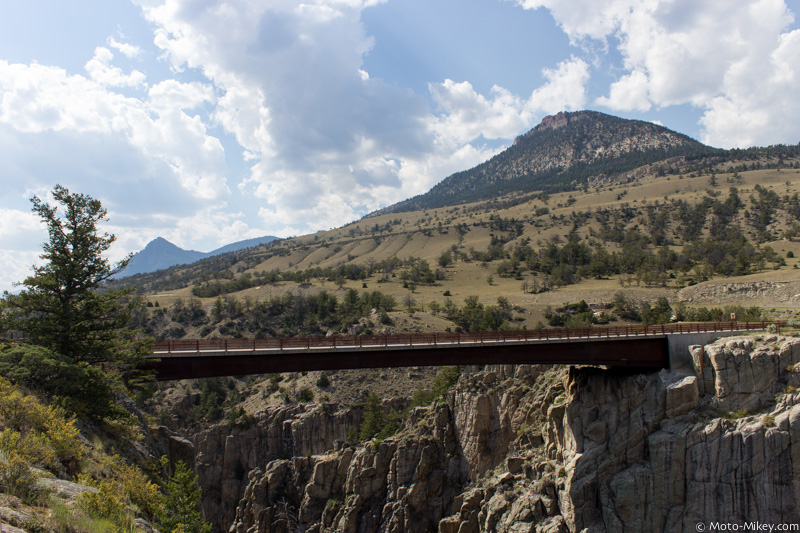 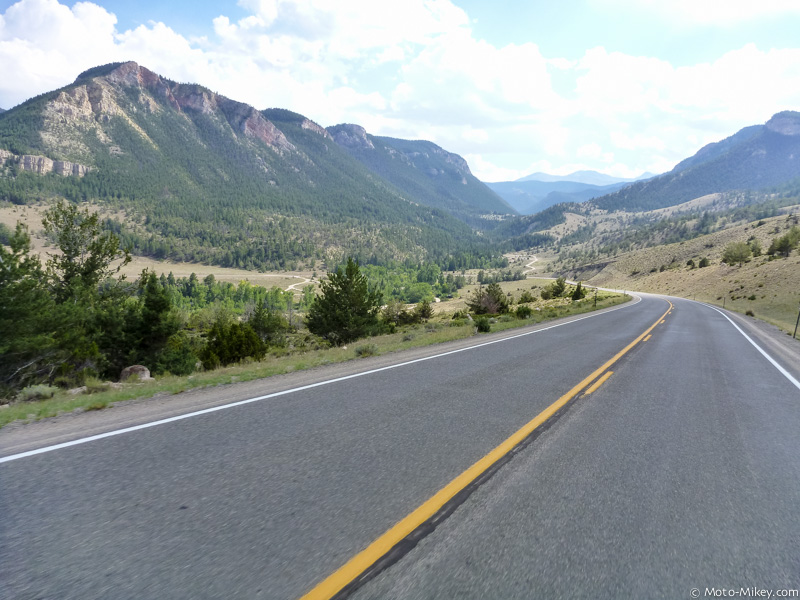 I think I like this road even more than the Beartooth Highway. Nearly as scenic and just as many turns. Less traffic too. 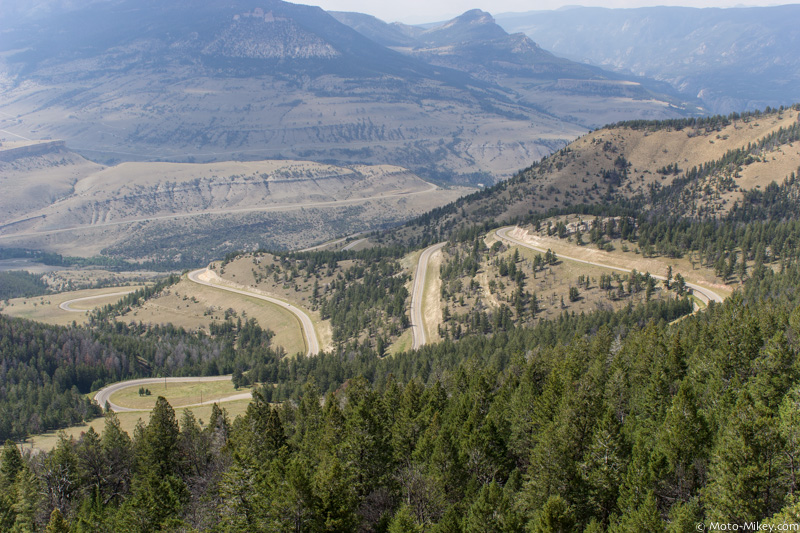 The highway ends in Cody, Wyoming. Once I got in town I stopped at the visitor center to gather some intel on the locale campgrounds in the area. Everything was a bit more expensive that I was expecting for this area.. I suppose it’s because Cody is a fairly touristy town due to Buffalo Bill being from here. At the visitor center I met another rider, Jason from California. He was riding back home from Michigan. After chatting for a bit, we decided to split the cost of a campsite that was up the street from us. Later on we went out to grab some dinner and a few beers. It was awesome to meet another rider, especially someone as laid back and easy going as Jason. I think we attracted a lot of attention in town and at the camp ground.. 😛