Back to riding solo today and out along the sacred valley. Nice cool temperatures, a sunny day and minimal traffic made for another nice ride in the Andes. 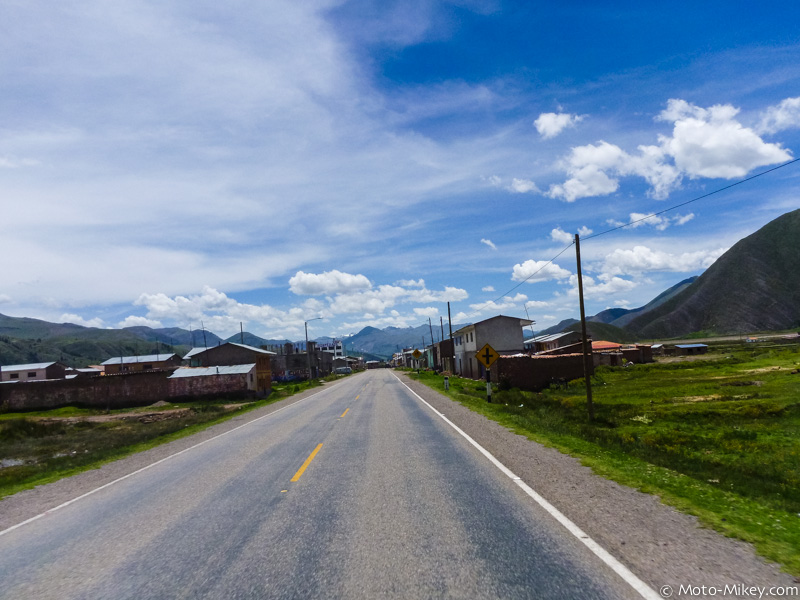 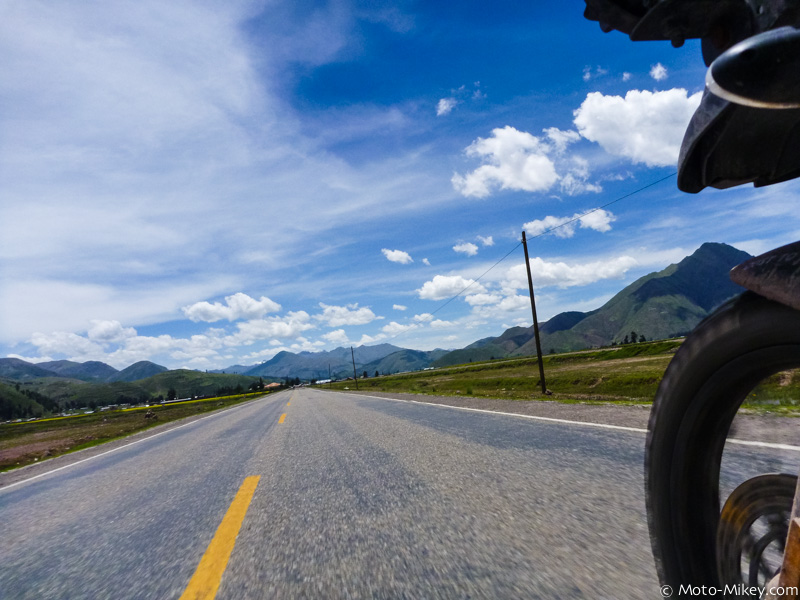 The Pan-Am worked it’s way up to around 15,000 feet a few times.. it got fairly cold up here and there was visible snow not too far away. 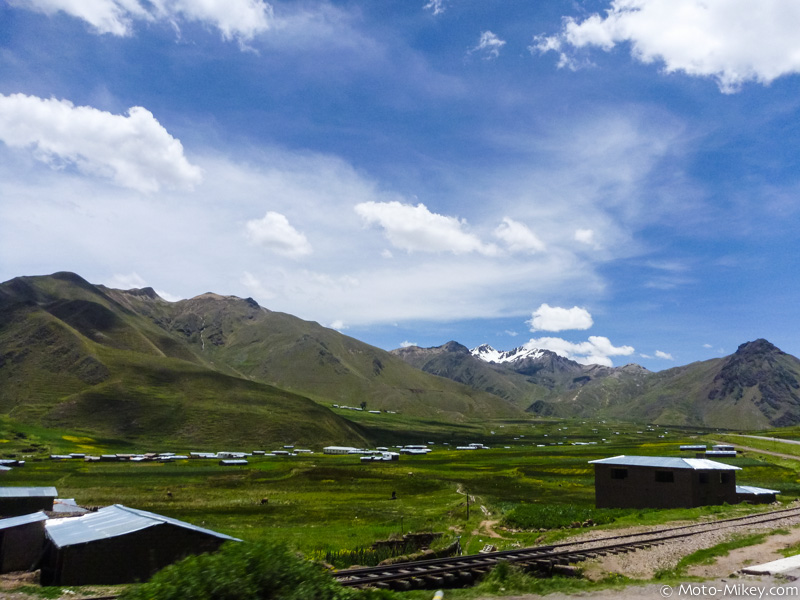 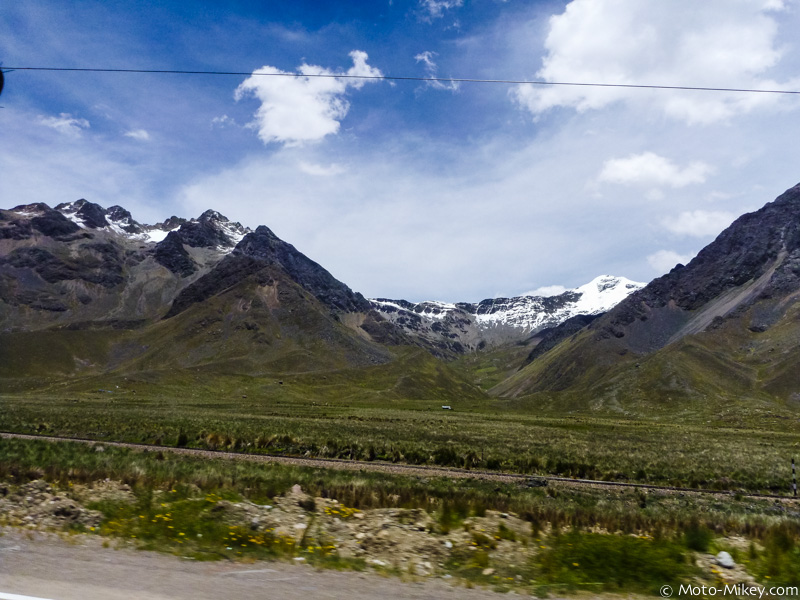 For lunch, I stopped at a very small place along side the road. I’m not exactly sure what I ate..? Some sort of meat and a few small potatoes.. It tasted a bit more ‘gamey’ than normal beef or meat.. I think it might have been llama or goat! Either way it was fairly good, cheap and something different. 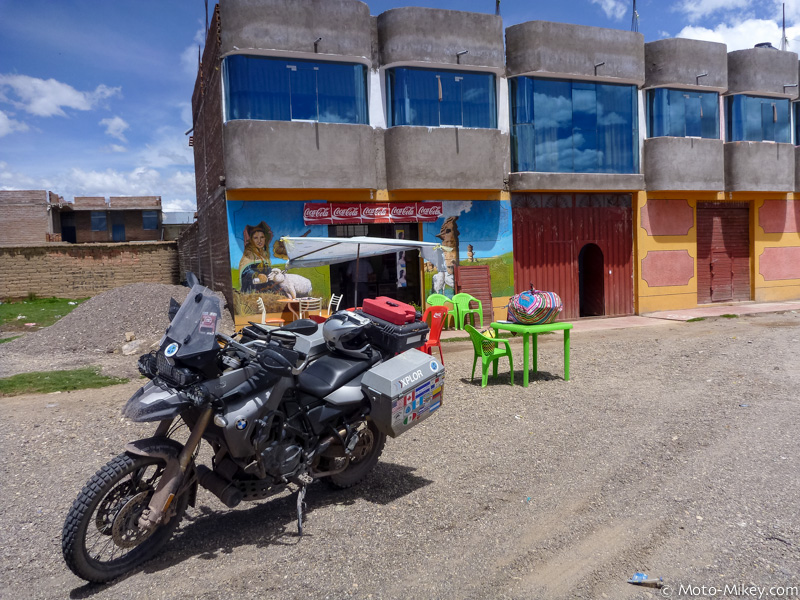 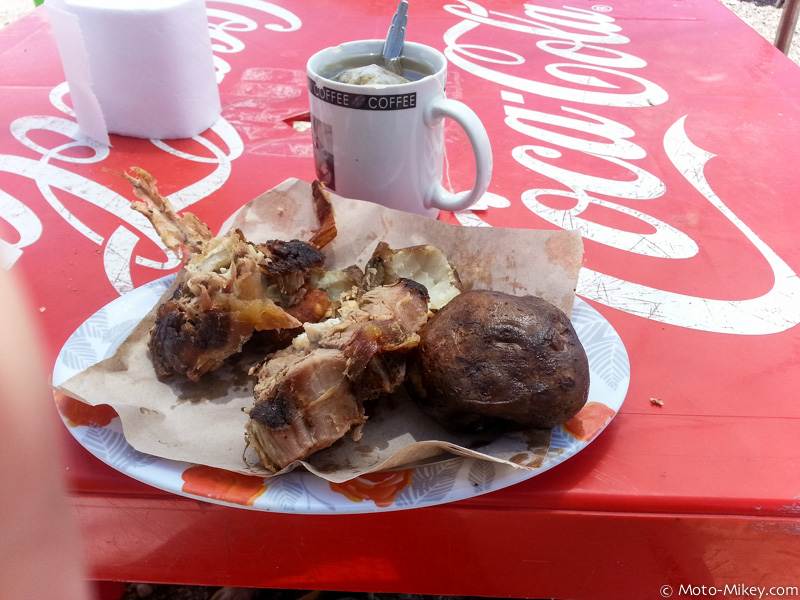 Along the way South, I passed through the city of Juliaca, Peru. Al, the owner of the Shamrock Pub in Medellin, had mentioned that it was a “a real shit-hole”.. and he was certainly right.. By far the worst looking city I’ve seen so far.. I couldn’t get out of there fast enough. I didn’t even stop to take a photo.

I continued riding on to the city of Puno, which sits on the shores of Lake Titicaca. 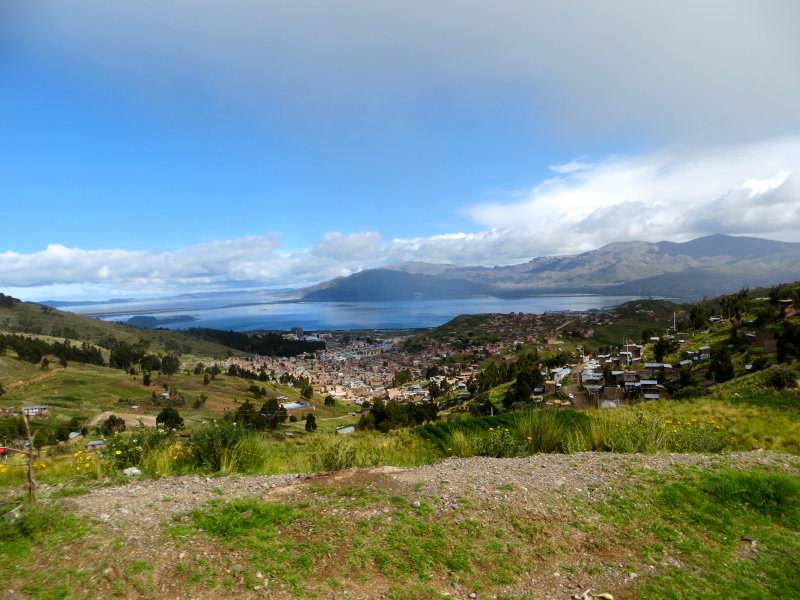 After riding around the city of Puno, I found a hotel and called it an early night. Today was the most miles I’ve ridden in a while.

Back on the bike today for another border crossing and into Bolivia! Most of the day was spent riding around the enormous Lake Titicaca towards Copacabana. 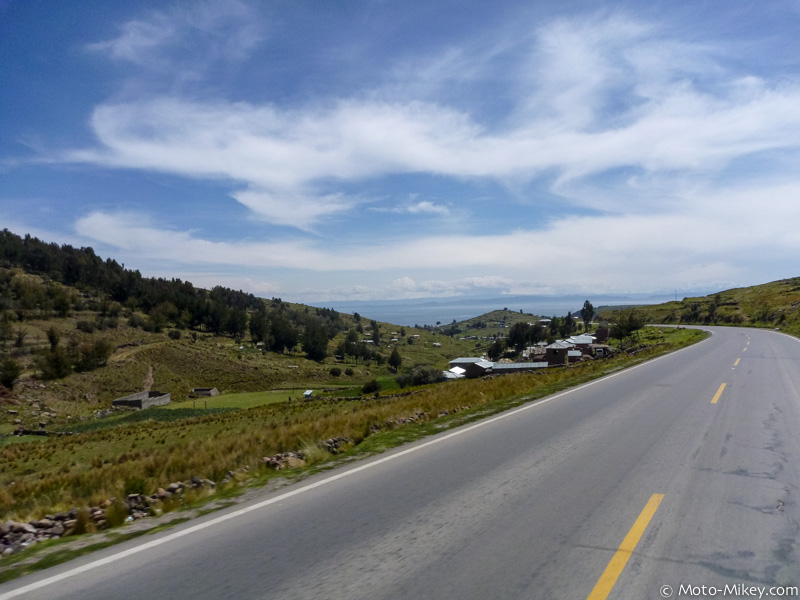 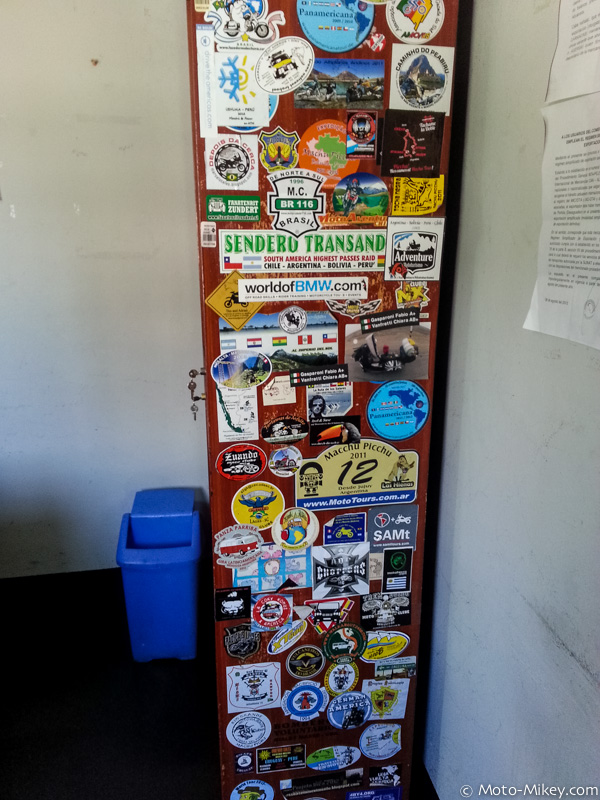 Entering Bolivia was also very easy but unfortunately for me the Aduana office had just closed for lunch as I arrived.. 1.5 hours later they were back up and the moto was imported in less than 2 minutes. Another thing worth noting is that Bolivia has a reciprocity fee for Americans.. this meant I had to hand over $135 for a Bolivian visa! Ouch! At least I knew about this before arriving at the border, so it wasn’t a big surprise. 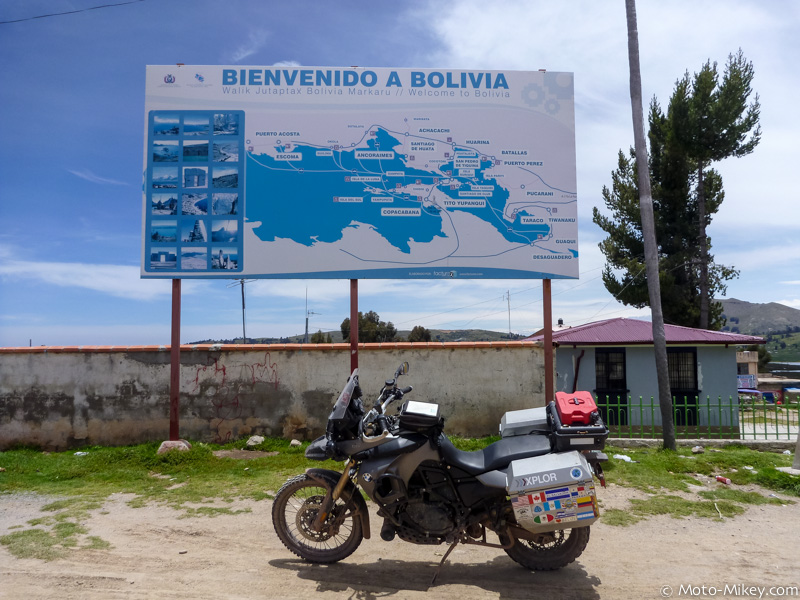 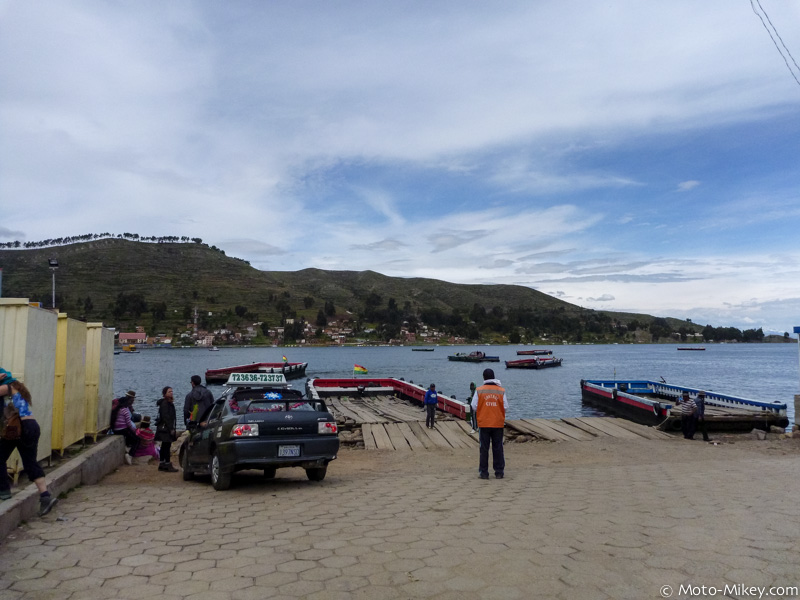 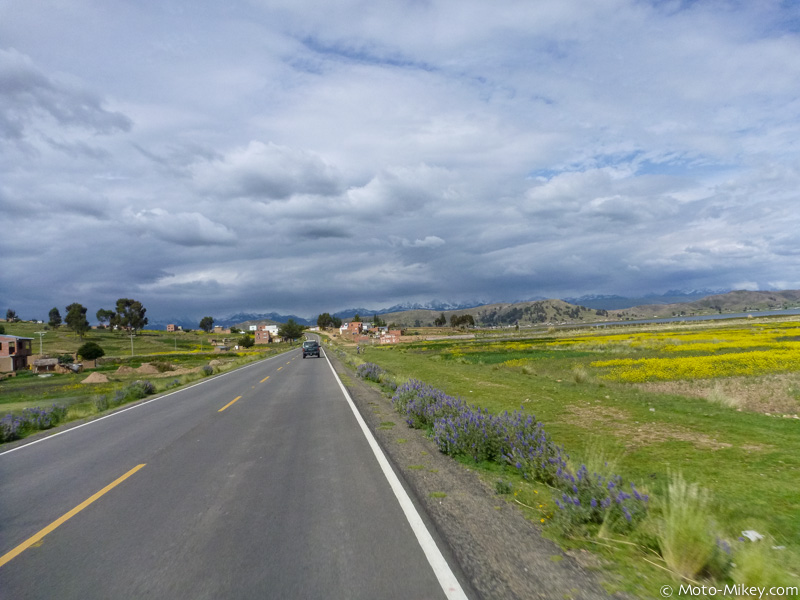 Along the way I stopped at nearly 5-6 different gas stations since I was starting to run low. Every station I stopped at refused to sell me gas because I was a foreigner. Bolivia has some weird laws/rules about selling gas to foreigners. The locals get their gasoline subsidized by the government (at a rate of about $1.50/gallon) but foreigners have to pay 3x that price. To do this, the gas station attendants are supposed to fill out a some-what lengthy receipt, but since it’s time consuming, most simply refuse to sell you gas. It can be very frustrating.. I even tried refusing to leave one gas station, telling them that my moto would no longer run, since it was empty.. the guy simply shrugged his shoulders and walked away! I hear it gets easier to buy fuel South of La Paz.. I hope so, because I don’t have much left!

I made it into La Paz, Bolivia; the highest capital city in the world, just in time for some evening rush hour traffic.. I think it took me over an hour to go about 10 kilometers. 😡 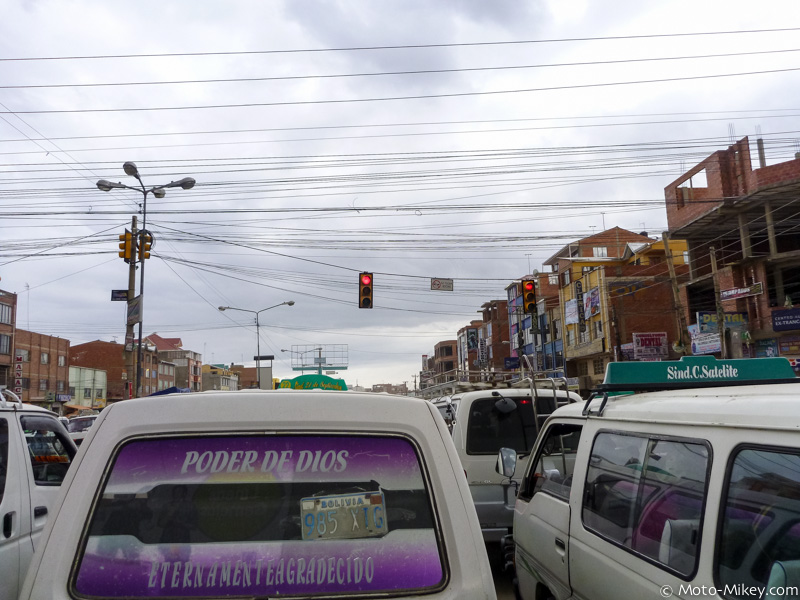