This morning I said goodbye to Nicaragua and hello to Costa Rica. Home of the Ticos and Pura Vida (pure life).

On my way out of Nica, I rode past a few miles of wind turbines that sit along the edge of Lake Nicaragua. There seems to be a steady breeze from the very large lake, so it makes sense to take advantage of it. 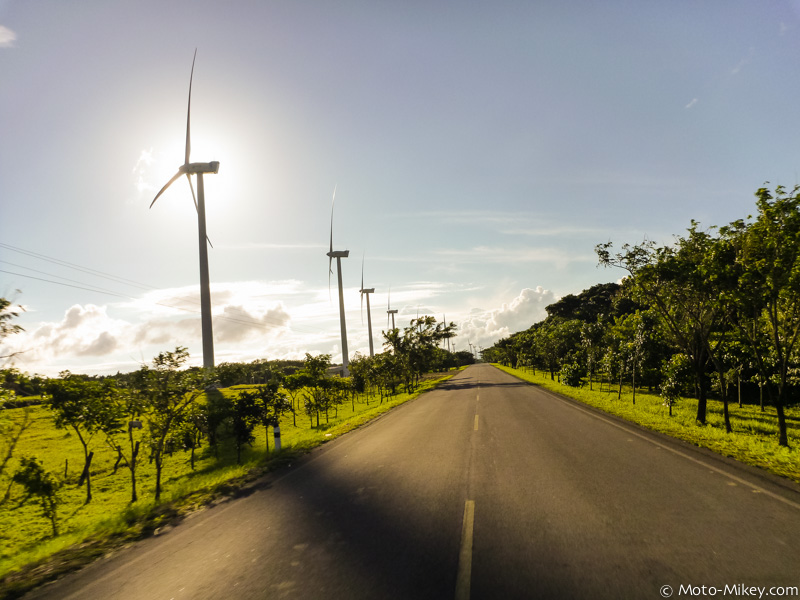 About 20km further down the road, I came to the Nica-Costa border crossing. It was quite unorganized and ended up taking 3 hours to get through both sides.. almost twice as long as any other border crossing so far. The Nica exit was jammed with bus loads of people coming from Costa Rica. I think it’s so busy here because of all the expats coming from Costa Rica to renew their visa (AKA doing a visa run). After about an hour of running around, I was free to cross over.

The Costa Rica side wasn’t any better. For a country which is supposed to be much more organized and politically/economically stable, the border crossing didn’t exactly match it’s reputation.. I had to go to 4 different offices (including 2x Aduana’s) which were spread out.. Wasn’t all that hard but it took 2 hours. The worst part was that the lady at the copy shop next to Aduana #1 lost my drivers license while making a copy of it! How you manage to lose something in a 4’x4′ little shack is beyond me. After throughly searching the shack for 10 minutes I called it a loss and moved on. Oh well, I’ll try to have another one mailed to me in Colombia.. I still have my Florida drivers license, Alaska ID card, and International Driving Permit, so I’m still good to go.

Costa Rica Aduana #2 window covered in Moto traveler stickers including a few that I recognize from other blogs. I asked the guy if I could put mine on but he said ‘not right now’ since his boss was standing nearby. I gave him my decal and he said he’d put it on after his boss left. Sweet 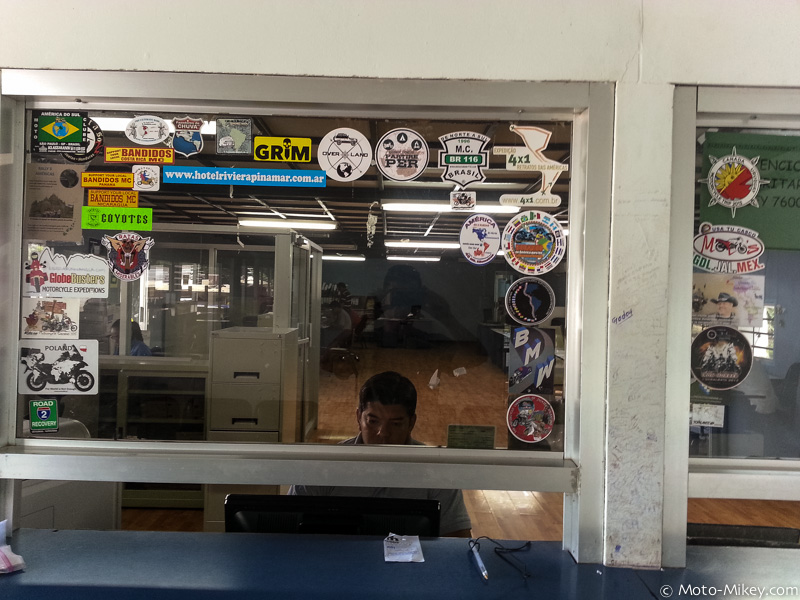 I’ve heard everyone say that Costa Rica is much more expensive than every other Central American country.. even still I was surprised by the prices of things here.. very much on par with USA prices and maybe somethings even more. Gas was around $5.40/gallon. My lunch while good, cost me $7!! and this was the set menu item (which is usually cheaper). Rice with chicken would normally cost me about $2-3 anywhere else. Oh well, I’m only gonna be here for about a week, so not a big deal. 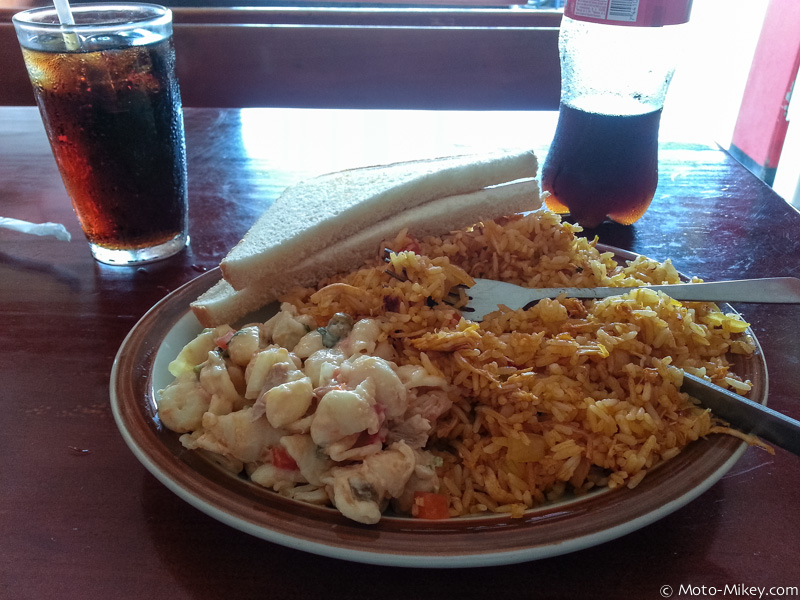 Since I didn’t get to do any surfing in Nicaragua, my destination today was another beach. I read up on this one beach in particular called Playa Grande. It’s a really small, sleepy town (if you can even call it that) devoid of any substantial commercialization thanks to Costa Rica’s natural preservation laws. It’s made up of a few expat homes, a couple of small hotels and 1-2 surf shops, all set in a jungle like environment with only dirt roads. Very quite here. I like it.

I checked into the Playa Grande Surf Camp which is on the Southern part of town. This place provides you with a place to stay in one of their bungalows as well as surf lessons, board rentals and a place to hang out, all at a pretty reasonable price.

After getting settled in, I went down to the beach and was just in time to catch the sunset over the Pacific. Tomorrow would be a day at the beach and my first time surfing. 😮 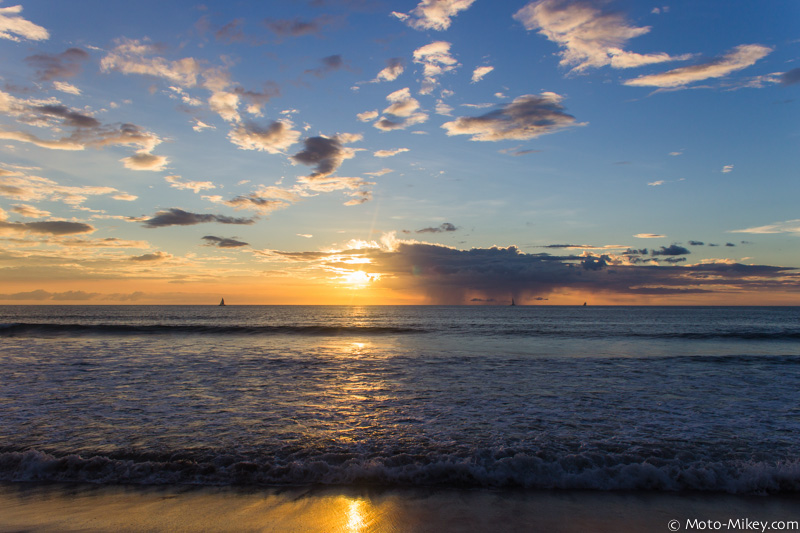 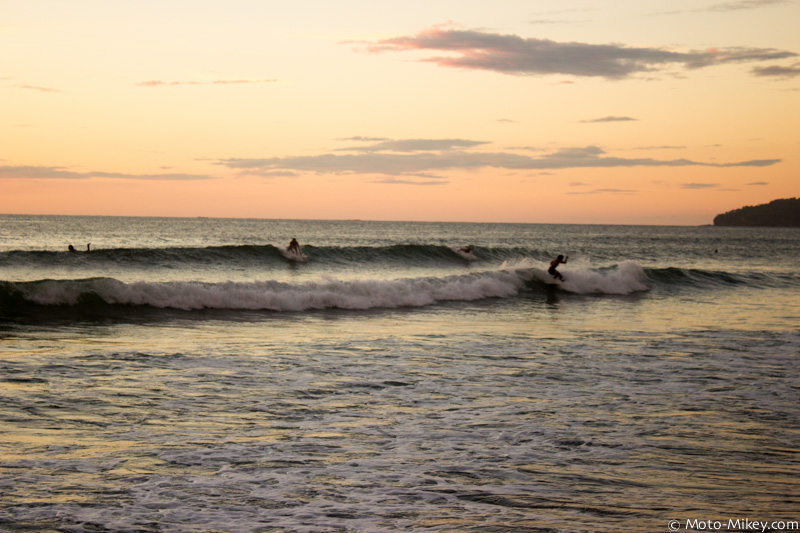