Corruption. Bribery. Theft. This sounds like the tag line for some Bollywood movie or something.. For most overlanders, it’s actually the 3 most commonly associated words with Honduras and the border crossings there.

For me, crossing borders are always one of the most challenging parts of the trip. So far they’ve all been fairly easy and harmless, albeit sometimes long. Everyone going through Central America has heard about the infamous El Amatillo border crossing between El Salvador and Honduras. I’ve frequently heard stories from fellow riders who have been charged up to $200 by immoral ‘helpers’.

To catch a glimpse of what I’m talking about checkout this video from another rider:
http://www.youtube.com/watch?v=J6AN2oqO9EE

I decided to read over the Honduras border crossing guides one last time before I left. After mentally preparing myself for chaos, I rolled out towards the border.. but not before stopping for coffee/breakfast at a gas station.

I arrived at the border by 0720. After fending off about 15 different helpers (all who were very eager and trying to convince me this was impossible without their help), I was cleared through El Salvador aduana and continued on down the road to Immigration. A quick check of my passport at the next office and I was free from El Salvador. So far this was easy.. 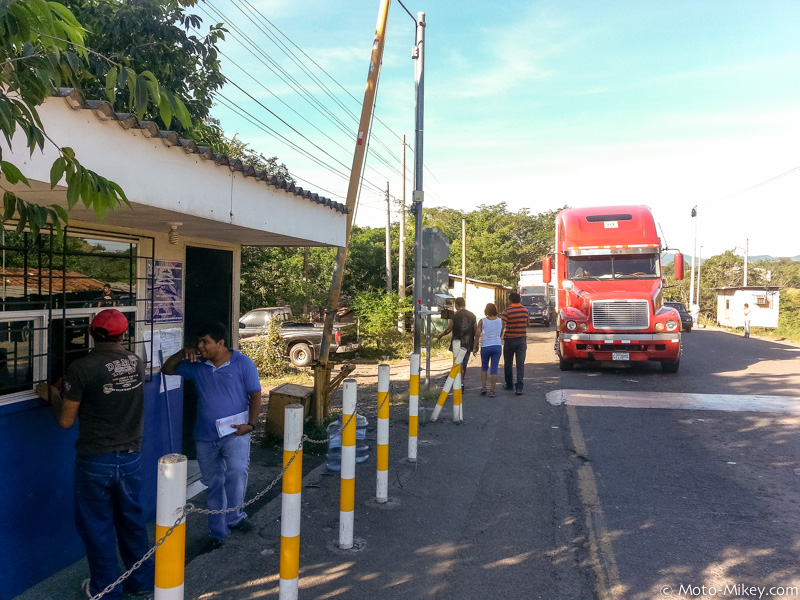 As I crossed the bridge over into Honduras, I was stopped by an official who asked for my moto paperwork, passport, etc. I was supposed to hand it over to him and then keep riding down the road to meet him at the customs building. I normally wouldn’t let my real documents out of sight even if they looked like a legit customs agent.. however, I had read that this is normal for Honduras.

I parked in front of the Honduran immigration/aduana building and was directed to go to the immigration building first. Got my passport stamped, filled out a form and paid the $3 fee. Again, so far so easy.. 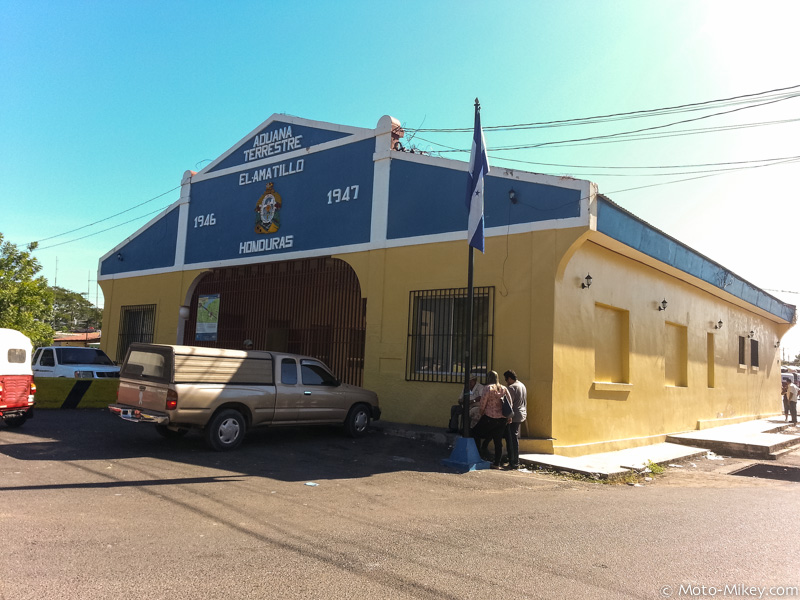 Then over to Aduana to get the moto imported. This part was a bit more involved but still easy. Honduras requires tons of copies.. they want 3x copies of nearly every document you can imagine: passport photo page, passport page with new honduras stamp, registration, drivers license, moto title, etc.. it’s a bit ridiculous. Anyways, after getting 25+ copies made and paying the official $35 import fee (at a separate bank), I was free to go.. WTF? This was way too easy.. and it only took about an hour and 40 minutes! 😎

I followed this guide and it was pretty much spot on:
http://www.liferemotely.com/trip-shenanigans/el-salvador/169-el-salvador-to-honduras-border-crossing

My plan was to zip straight through Honduras and into Nicaragua today. I cruised down the PanAm for about 2 hours. Along the way I must have passed through over 15 police check points and was only stopped at one. After answering the usual questions of ‘where are you coming from’ and ‘where are you going’, I was free to go.

To be fair to the country of Honduras, I have heard that they’ve been working hard to fix the problems in their country. The government supposedly fired the entire police force and started fresh. Things like the broken border process and corrupt cops along the road are seemingly a thing of the past here.. and I can confirm I didn’t have a single problem. I actually have a tiny bit of regret that I didn’t at least stay 2-3 days here to check the country out. It’s actually very beautiful here with lots of green rolling hills and volcanoes. So if you’re riding through here, fear not. Things are looking up for Honduras. Stay a while and check it out.

I cleared out of Honduras with relative easy and rode over the the bridge into Nicaragua. There were a ton of trucks lined up and I actually went up the wrong side of the road and parked on the Nicaragua exit side of the customs building. This turned out to be a great idea since there were no ‘helpers’ on the exit side of the building and they didn’t know I was here. I was processed through immigration and aduana in under 40 minutes. I then had to find a place to buy insurance since it’s legally required here in Nicaragua. I quick peak over into the  entrance side parking lot and I spotted a lady selling the policy I needed. Only cost $12 for a month.

I was nearly free. I rode back up the the way I had come earlier in order to ride down the correct side and in the process I had apparently awakened a swarm of helpers. I still had to get the bike fumigated and as I rode up to the spray station I was mobbed by literally 20+ helpers all at the same time.. all trying to be my ‘helper’ in hopes of making some money off me. You should have seen their faces when I told them I had already cleared through immigration and aduana on the other side of the building and I didn’t need anymore help 😆 I wish I had it on GoPro. Even still they asked me for a propina (tip)… WTF? Get outta here!

So yeah, possible pro-tip for other moto riders: Ride up the ‘wrong side’ of the rode and enter the customs building through the exit side of the parking lot. The helpers will have no idea you’re there and you’ll be left alone. 😎

I rode off into Nica without any problems and within another 1-2 hours I was in the city of Leon. This is another interesting old colonial city founded by the Spaniards a few hundred years ago.

I rode around town looking for a hotel and after 30 minutes I found the Hotel Austria. It’s located about 1 block South of the main plaza, has good secure parking and is actually a really nice place.. but at $40/night I won’t be staying here for long.. maybe just 1-2 days. 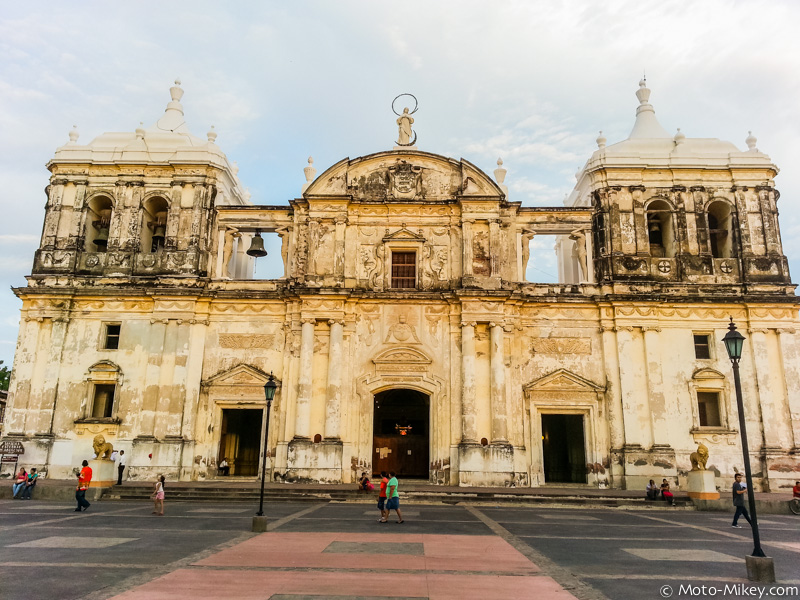 2 Responses to "Day 82: Running the Gauntlet"