Our goal today was to make it down to somewhere near Acapulco by 1300. Since it’s very hot and humid, we didn’t want to be riding in the mid day heat. We left a little bit earlier than usual to get some miles in while it was still a decent temperature out. After riding for about an hour or so, we found a cool restaurant on the side of the road that had an excellent view of the Pacific. 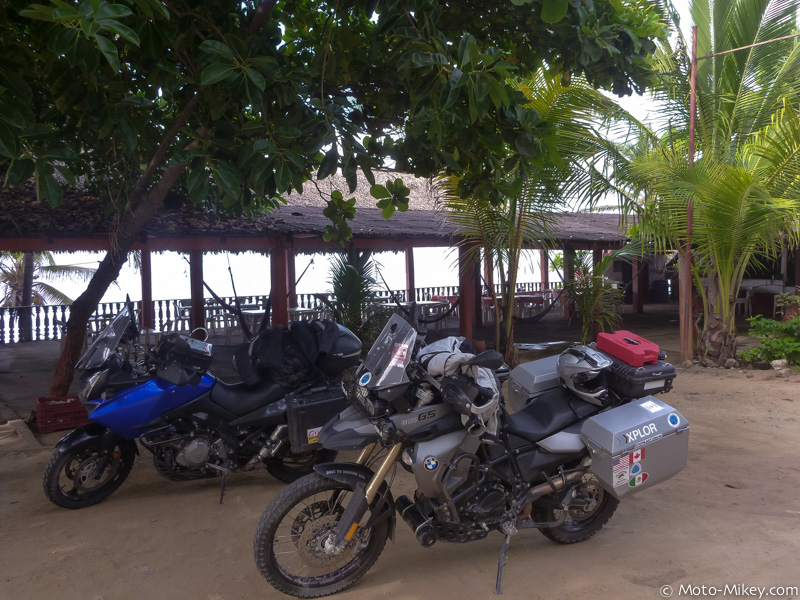 We had a standard Mexican breakfast of huevos con jamon y frijoles along with some more Nescafe instant coffee.

In Mexico, there doesn’t seem to be any stigma against drinking beer/alcohol in the morning. A few times since being here i’ve seen Mexicans drinking beer with their breakfast. This place was no different with the guys next to us enjoying a few cold beers at 9 in the morning. I prefer the other drug of choice; caffeine.

Central Mexico’s Pacific coast was hit by Hurricane Manuel about a month earlier and I had heard there was substantial damage to the roads in the area. We were able to see first hand how much damage and flooding occurred.. some small towns looked as if they were almost completely wiped out. The rivers had grown to 5x their normal size. 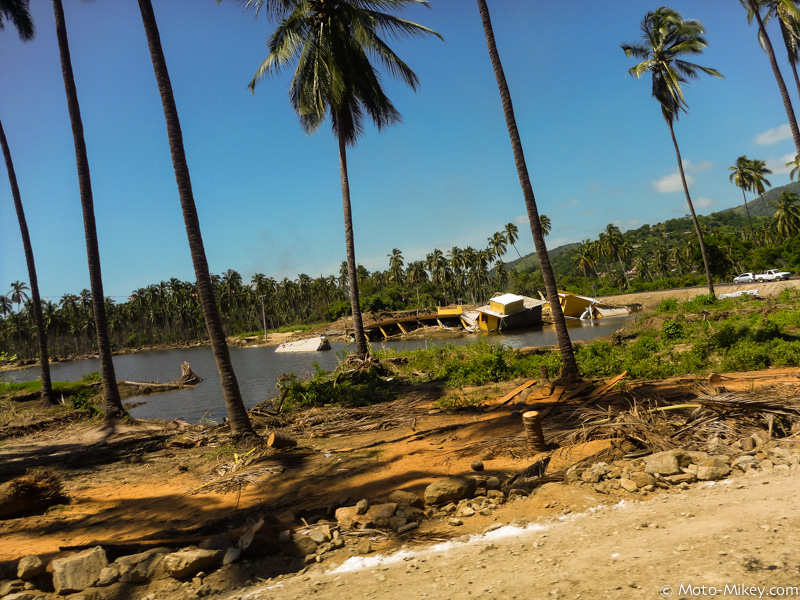 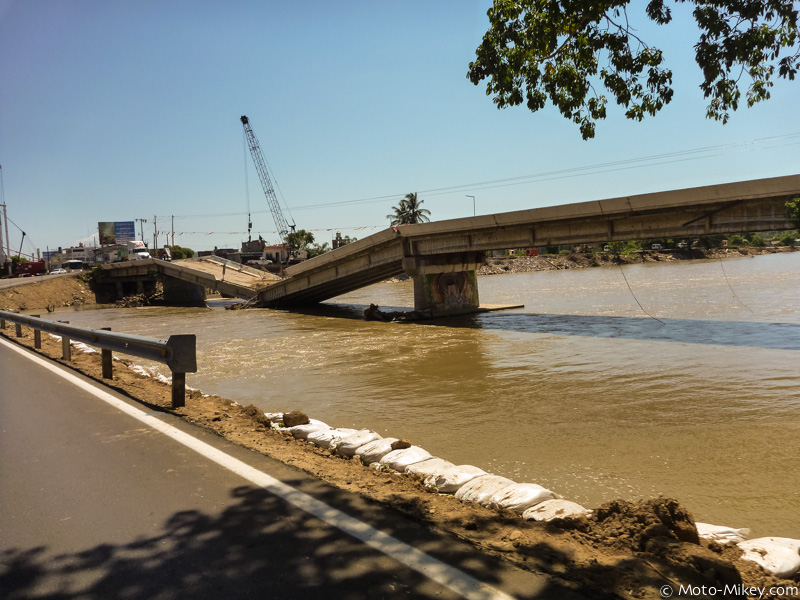 We didn’t want to stay in Acapulco since it’s not the greatest area and we figured the beaches wouldn’t be anything special. I had a place written down that I had read about in another ADV ride report and we went straight there. It turned out to be a really awesome place!

Hotel Roxanna in Pie de la Cuesta. I think we both immediately liked this place. Community hammocks all over the place, a stocked beer fridge with the honor system, nice pool and about 25 meters from the beach.. oh and we were the only ones here!

We thought we got a pretty good deal too at 350 pesos ($26)/night each for the grande king rooms. 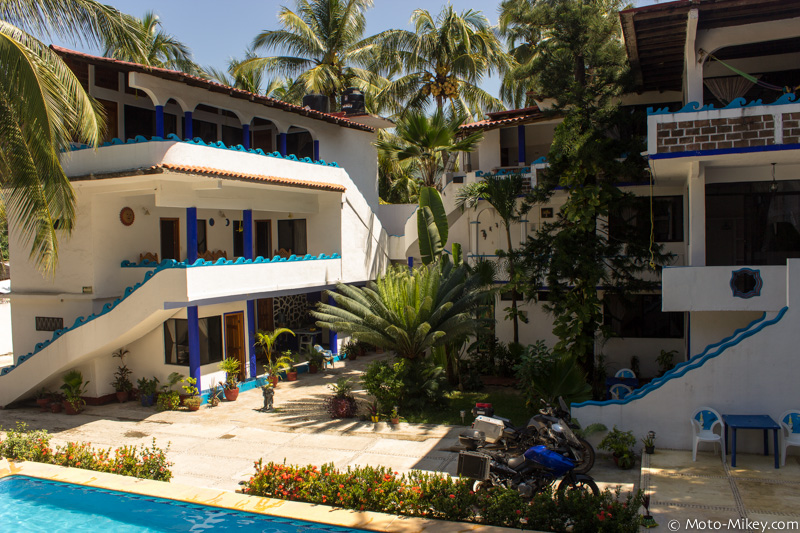 Since it was still fairly early, we hung out for bit in the hammocks and relaxed till it cooled off. Later on went out in search for dinner (fish tacos on our mind).. 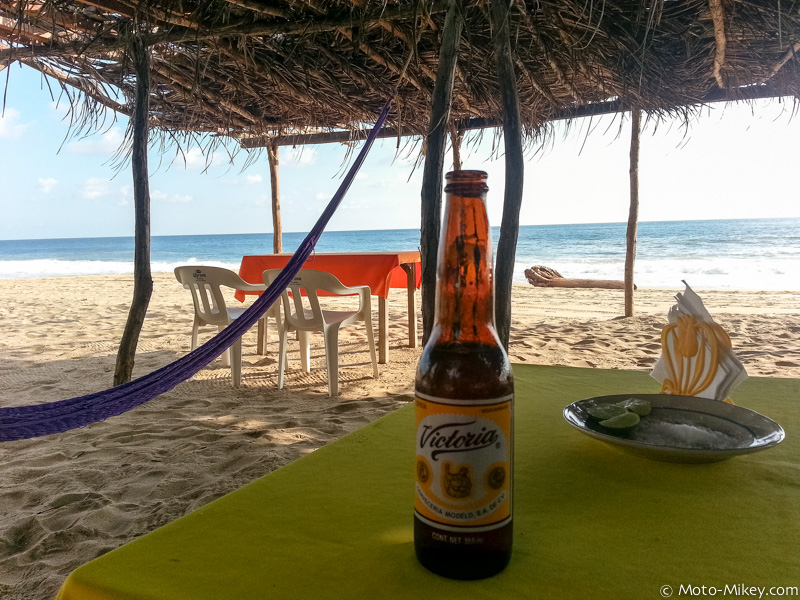 Down on the beach there were a bunch of little restaurants. All of them pretty much empty since it seems to be the very low season here and all of them begging for our business. We went to the first one we came upon but should have looked around a bit more. The waiter/owner dude came out sporting 2x fresh looking Snapper fish and asked if we wanted these for dinner.. “no gracias”.. The menu said they had fish tacos, so of course we ordered those instead..

What we got was technically fish tacos but NOT what we were really looking for.. Our tacos were made with canned chunk light tuna.. 😆 They didn’t even have anything else on them.. just a scoop of canned (crappy) tuna.. no salsa, no tomato, etc.. 😡

Thinking back on it now, I think the waiter/cook/whoever was a bit reluctant when we asked for them. I suppose in the low season, they just don’t have fish available for these kinda things. Oh well.. lesson learned? Maybe..

One Response to "Day 50: Cruisin down the coast"