This morning I attempted to take a shower at the campground shower facilities but didn’t have a ‘loonie’ as the showers were coin operated. I thought a loonie was a $2 coin when it was actually a $1 coin. So, no shower for me.. That’s what I get for being American and not knowing any better 😛 Afterwards, I quietly rolled out of camp as to not wake anyone and went back to downtown Whitehorse to stop at a Tim Hortons for breakfast and WiFi. After doing a little research online I went over Yukon Honda to inquire about tires. 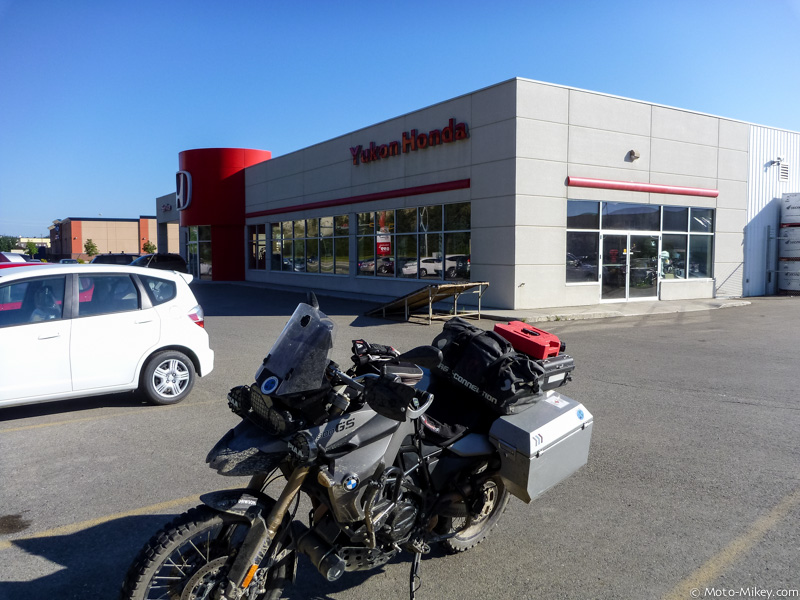 I checked in with the parts department and they had a Heidenau K60 rear tire and TKC80 front tire in the sizes I needed.. but at very expensive prices. They wanted $540 for the 2 tires which only included mount/balance if I pulled the wheels off my bike. I went back outside to take another look at my tires and make a decision. Back in the parking lot I met another rider from Cali who was having work done to his sons KLR that had broken down on their way up to Alaska. He mentioned that he thought my tires had enough life left in them to make it down to Grande Prairie, Edmonton or maybe even Calgary. I think (hope) he’s right, so I decided to skip on the tires and keep riding on. I also decided to skip on finding a fabrication shop in Whitehorse and try to find something lower down in Canada near Calgary or maybe in the US somewhere. I was getting by for now with the bent in pannier.

After stopping in a small town (don’t recall the name) for gas and a quick lunch, I made the final push towards Watson Lake. Once there I wanted to stop and get some photos of the Sign Post Forest. I was determined to add a Moto-Mikey decal somewhere

Afterwards, I gassed up and decided to try to make it to Muncho Lake to camp tonight. It was already 1700 when I left Watson Lake, so I hoped it wouldn’t take too long to get there.. The reason I decided to take the ALCAN all the way down to Dawson Creek instead of the Stewart-Cassiar Highway (which is usually more often recommended and supposedly more scenic) is because I had already driven the Cassiar on my way up to Alaska a few years ago. So I decided that doing something new was the better choice. Along the ALCAN towards Muncho Lake, I saw lots of wildlife; a black bear cub, a fatass brown bear and a bunch of bison. I can now check Bison off the life-must-see list. 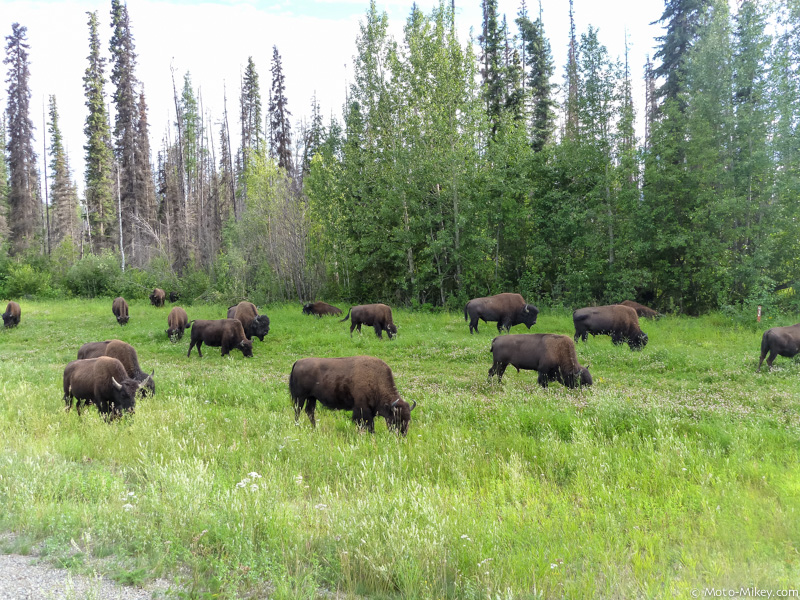 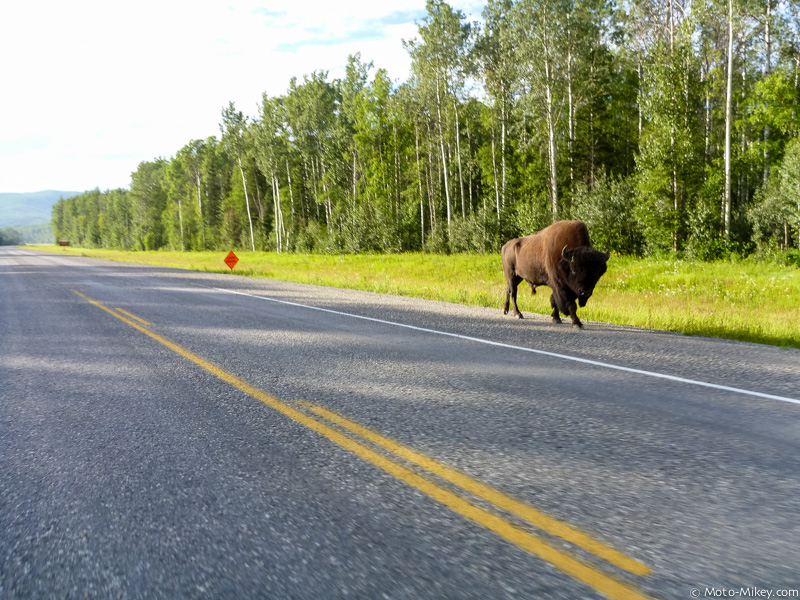 I rolled into the Muncho Lake park area around 1930 and proceeded to look for a camp site. The first 2 camp grounds I checked where completely booked with no room for even my small tent. WTF is going on with Canadians and camping? They sure do love it here.. Every campground I’ve been to in the past few days has been packed.

Come to find out it’s a 3-4 day weekend as Monday is a Canadian ‘statutory holiday’. This pretty much means everyone has off from work on Monday and possibly even the Friday before the weekend. So what do they do? They go camping! I think it’s kinda like Americans BBQing (and/or camping) on Memorial Day or Labor day. I sure picked a great time to go camping in Canada! No wonder why every place was busy.

I checked at the Northern Rockies Lodge to see if they had any camping spots amoung their cabins. They had one small grassy area I could camp on. How much? $40! That’s twice as much as I have ever paid before for a camping spot. Humm.. What to do.. There was only one other campground left in the area and it was likely full too. So I decided to fork over the forty bucks and be done with it. I was already exhausted from riding nearly 450 miles over the last 10-12 hours. The upside was the lodge had a dining room which was serving dinner till 2300 and they had WiFi along with hot showers. Okay, so it’s a nice place and has nice amenities but damn $40 is still a lot for a section of grass to put my tent on.