Well, it didn’t rain out last night. I’m actually kinda disappointed it didn’t.. if I’m going to drop $90 on a hotel room to avoid the rain then it had better rain! That doesn’t sound very hardcore biker-ish of me, does it.. Anyways, I grabbed coffee and a breakfast burrito at a small cafe in Tok on my way out of town along with a blueberry scone from lunch later on. Today was going to be a moderately long day with about 380 miles of riding to Whitehorse, Yukon from Tok, Alaska. Shortly after facing the normal barrage of interrogation questions from the Canadian border official and making my way into Canada I came to my first road works section of the day complete with line of traffic and pilot car. 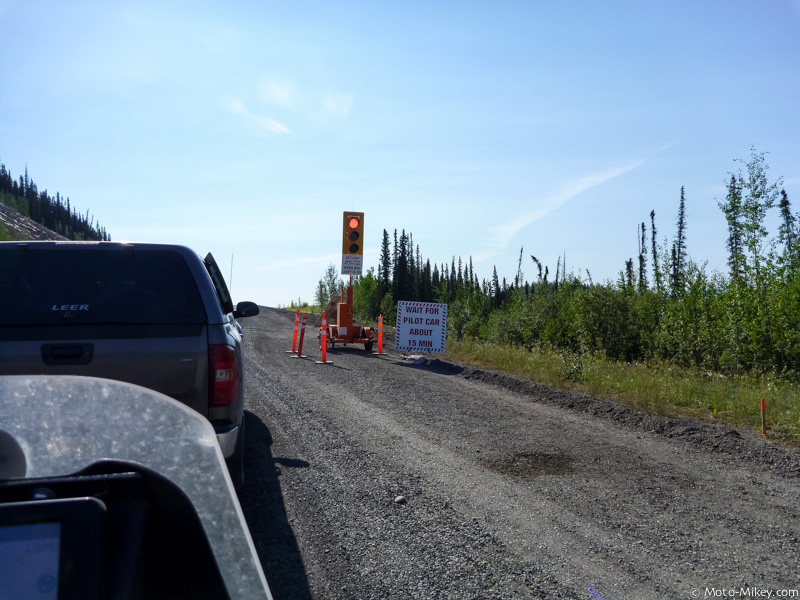 It was here where I proceeded to drop my bike.. no reason why, just bam, over she goes onto the right side. I had already dismounted the bike for about 5 seconds before she decided to take a dirt nap.. WTF? I can only guess that the road was off camber and the bike didn’t have enough of a lean angle on it to stay tilted over on the kickstand. No big deal, just lift her up and good to go. Unfortunately, my right side pannier has taken a beating over the last few years and doesn’t take well to continued abuse. The rack and pannier is now bent all the way in and requires me to remove the pannier to open the gas cap (which is mounted on the rear of the bike next to the seat). I had just spent a few hours bending the rack back into shape a week before this too. 😡 Now I really need to order a replacement bracket. I’m going to try to find a welding/fabrication shop in Whitehorse to bend this thing back into shape for me. I then spent the next 3 hours of riding annoyed about this issue. 😐 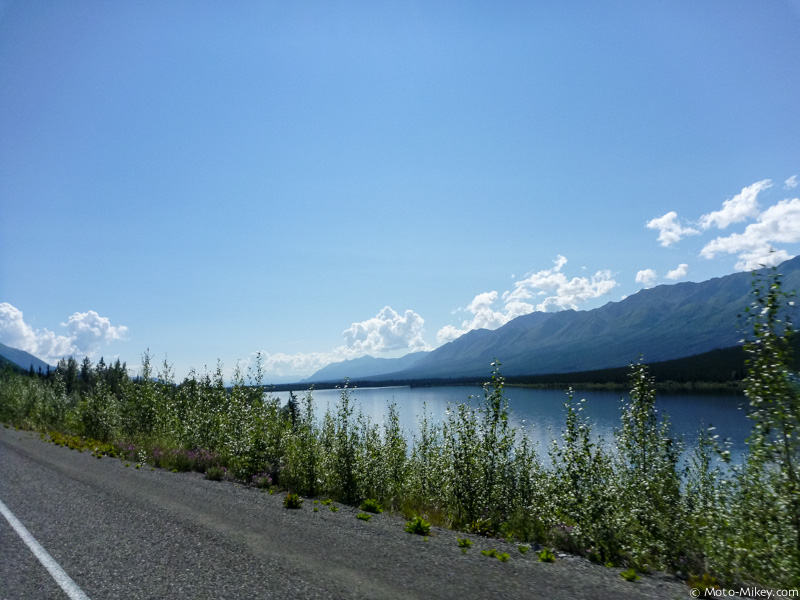 At least the weather was nice and a pleasant 70F. The ALCAN from Tok to Haines Junction is pretty rough in some spots and has lots of gravel sections which I wasn’t expecting, not that any of this is an issue for the F800GS. In Disaster bay (a really small town in Yukon), I got gas, chowed down my blueberry scone for lunch and surveyed the damage from this mornings tip over. It had bent both right side pannier brackets pretty damn good 🙁

Other than this mornings tip-over, the rest of the day was fairly uneventful. The riding was mostly through a long river valley with mountains on both sides and lots of lakes. I think I was starting to get a bit bored with the same old scenery for hundreds of miles because I started taking different photo angles. yeah, I know, be careful.. 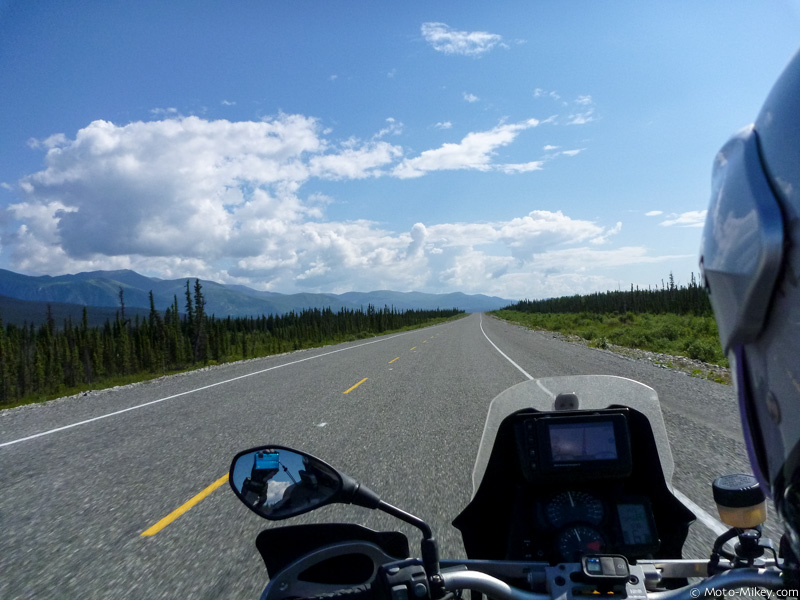 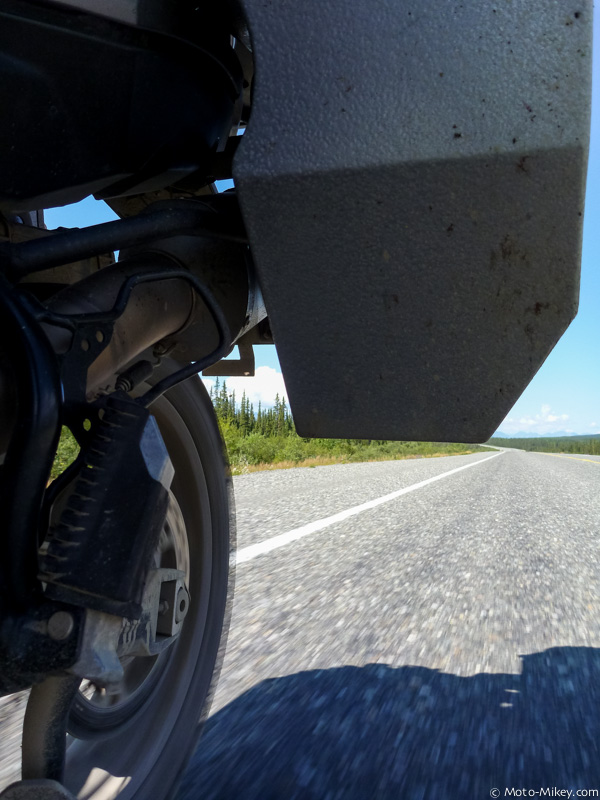 I stopped in Haines Junction which is still about another 2 hour ride from Whitehorse. I found a cool little bakery (sorry, no pic) and had some coffee ice cream. I don’t really like sweet stuff, but coffee ice cream is an exception, especially when riding for 8 hours. There I met 3 guys on motos heading to Alaska from Cali, so we chatted for a minute before I took off for the final push into Whitehorse. Two hours later I got into town around 1800 and cruised around checking it out. I really like this place.. it’s not too big but still has everything you’d need. It’s also clean and has some Northern Yukon charm to it. I talked to a local at the park where I stopped to pee and he recommended I go up the street to where there was a farmers market going on to grab dinner. I was initially going to eat dinner at the Klondike BBQ and Salon restaurant as recommended by another ADVrider, but it was jam packed with what looked like an hour wait for a table. So, onto the farmers market I went. Shortly after arriving, I met another rider, Joe from New Zealand (another Kiwi!) who was on his way up from South America. Awesome coincidence. He was riding a DR650 that he had bought in New Zealand and shipped over to Santiago, Chile to ride around South America and then on up into Canada. He’s been on the road for the last 15 months so it was great to talk to him about riding down South and some of his expierences. It’s amazing how many other riders you run into on road when doing a long trip like this. After we grabbed a burger from one of the food stands, I took off to find a campsite at Robert Service Campground. 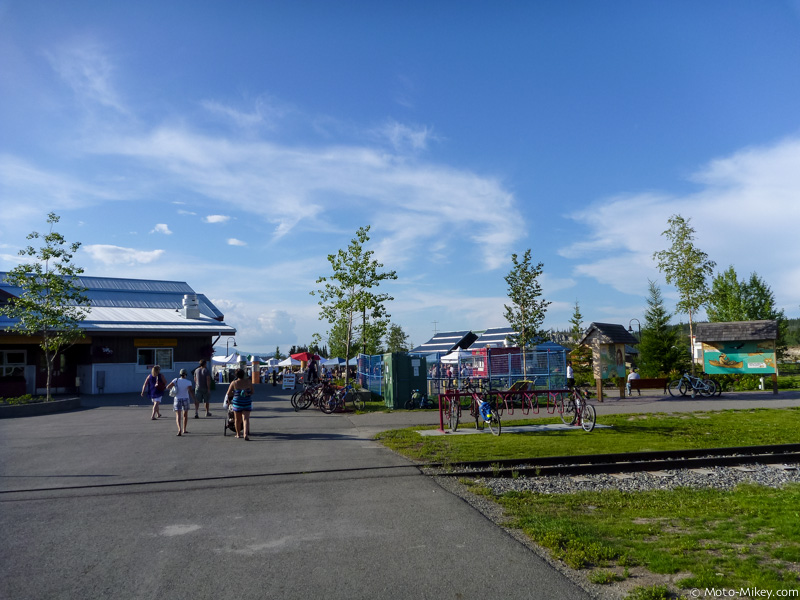 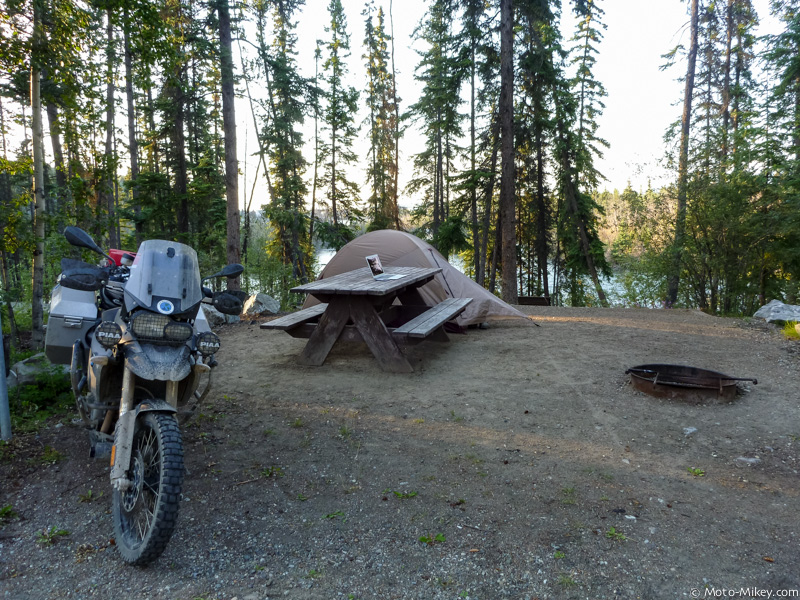 The campground was packed with people and I think I got one of the last spots available. It also wasn’t cheap at $20/night. One thing I did notice right away was the nearly complete lack of mosquitos. Nice! Tomorrow is going to be an interesting day. I’ll need to find a metal fabrication shop and check around for new tires. My TKC80 tires are almost dead and it’s a long way to anywhere else that might have any in stock.