We agreed to get up early and be on the road by 0700 today. This way we could ride back to Coldfoot for Breakfast before heading North. I literally packed up my camp site the fastest I could humanly possible. Now when I say there were A LOT of mosquitos around I mean it.. literally dozens swarming just around my tent. I woke up and could not only see them outside but also hear them! They knew I was inside and were waiting for me.. seriously. The second I opened my tent flap at least 10 flew straight in. I ran out, DEET’ed up (which only deterred about half of them) and quickly packed my gear. I rolled my tent up with about a dozen mozzies still flying around inside it. I hoped they would be dead by tonight incase I had to camp in Prudhoe Bay 😐 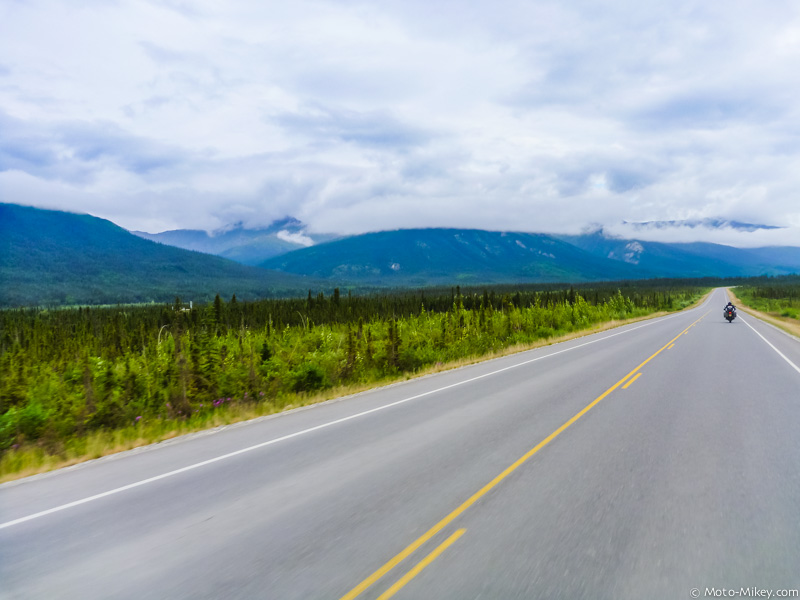 Breakfast was again buffet style at Coldfoot Camp. At $15, it certainly was expensive for a mediocre breakfast, but since there’s no other choices and Prudhoe Bay is a full days ride, we figured we should eat while it’s available. The weather was clearing up and it looked like it would be a beautiful day in the high country.

So far the road was great. It’s really hard packed dirt and has little to no dust. It’s more like riding on asphalt than an actual dirt or gravel road.. We were easily doing 50-60mph the entire time and I kept thinking to myself “I put knobby tires on for THIS!?”. 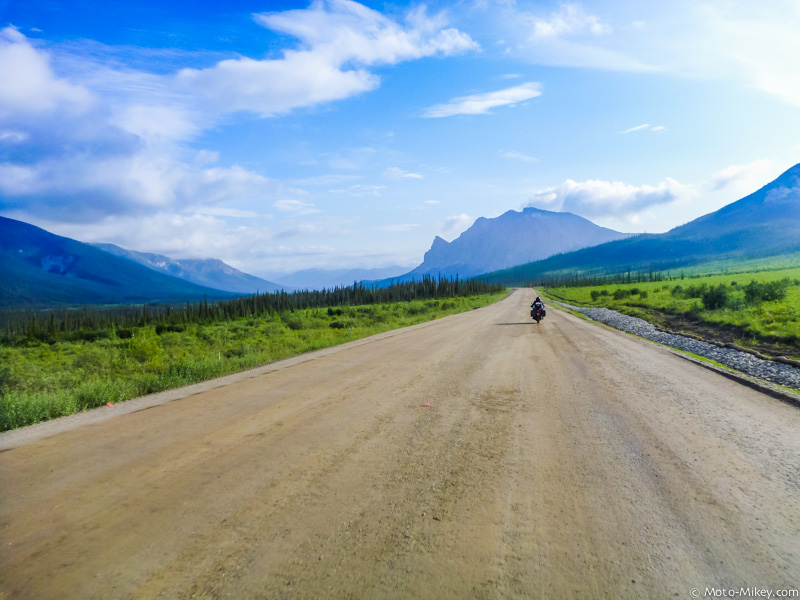 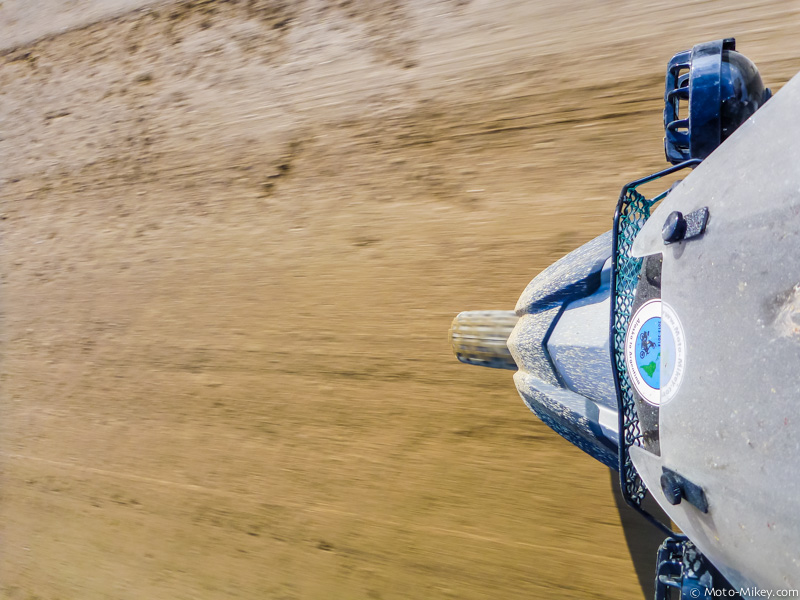 The Brooks Range separates The North Slopes from Central Alaska. To get over the range, you must cross over at Atigun Pass. It’s a very scenic winding part of the road that works its way up to about 4800 feet and is where the Dalton Highway crosses the Continental Divide. Crossing the Divide is something I hope to do a few more times on my way down through Canada and Montana. 🙂

Once North of the Brooks Range, things start to flatten out and open up a bit. It’s similar to riding through a vast open wetlands area. Nothing but flooded grassy areas on both sides of the road.. not at all what you would expect Alaska to look like. With stagnant wetlands comes even more mosquitos. One of the Aussies I met in Coldfoot who had just ridden back from Prudhoe said they were even worse up North but I don’t think I believed him then.. I do now! At one road works stop along the highway, there were some many mosquitos around that it quickly became  an absolute misery. I had all my gear on so I was fairly covered up, but these little buggers were persistent. I sunk down into my jacket and held my glove up to my neck to keep from getting bitten on my only exposed skin. I’m pretty sure I got bitten on my scalp by a few which flew into my helmet via the small air vents. Bastards! 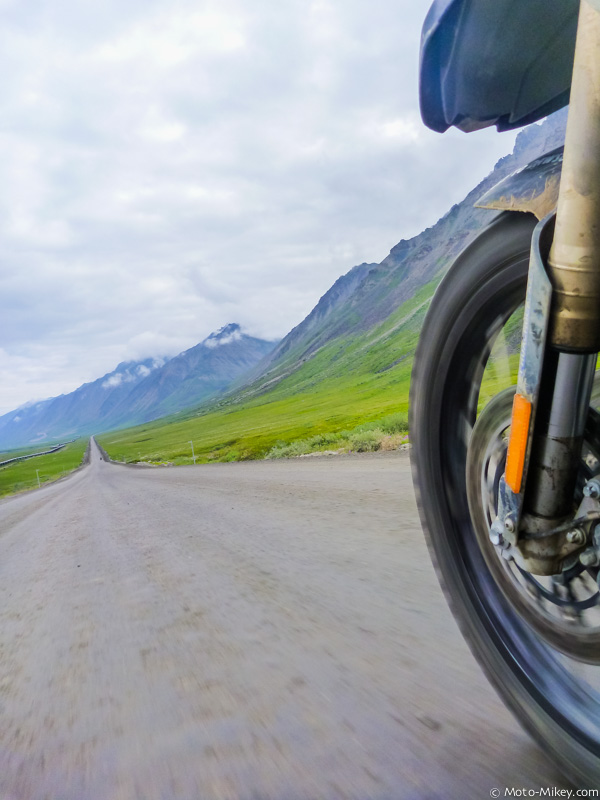 Along the way we past a few bikers (bicycles, not motos) who were riding South from Prudhoe Bay. I thought we were kinda crazy for doing it on moto’s but these guys were doing it on bicycles! To me that’s just crazyness.. especially with all the mozzies and how remote it is out here. And as you’d expect they all looked miserable. Not a single one had a smile. 😐 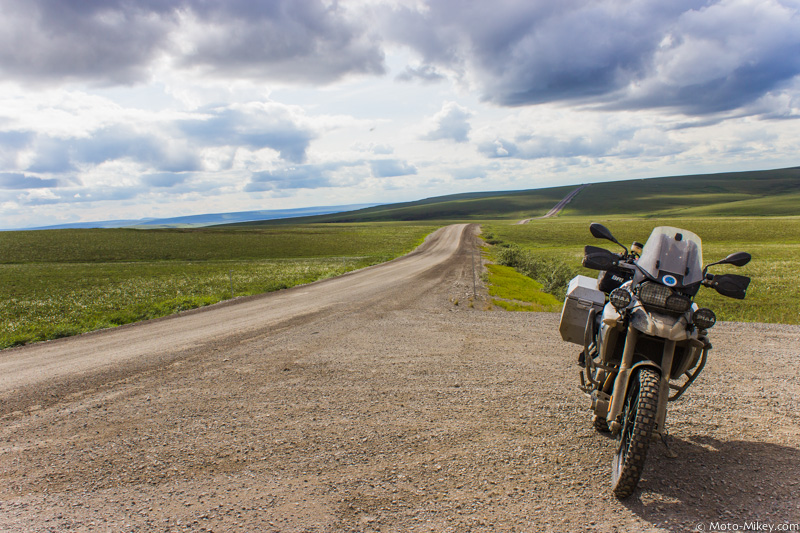 The section of the Dalton Highway from Coldfoot to Prudhoe Bay is about 250 miles and is actually the longest section of highway in the United States that doesn’t have any services available along it. For Peter and I, that meant we would have to stop and add the extra fuel we were carrying to our tanks. About 40 miles outside Prudhoe, our gas lights came on. Initially we were going to see how far we could make it but decided not to push it incase one of our bikes didn’t want to start after running out of fuel. 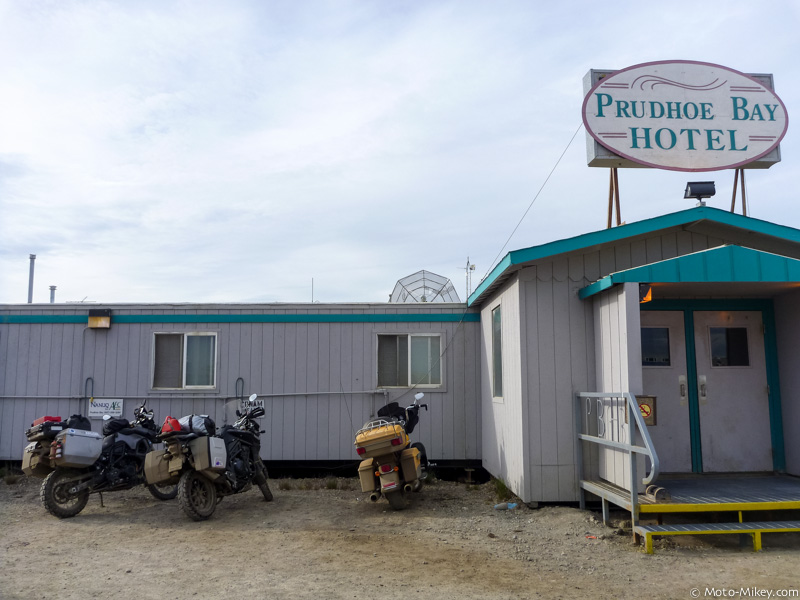 Peter had emailed the Prudhoe Bay Hotel a few days in advance in an attempt to get a reservation for himself. My travel philosophy is a bit more nonchalant and figured I would just show up and inquire. At $220/night for a ‘dorm style room’, Peter and I decided to split one, making it $110 for each of us. That’s a pretty good deal especially considering it includes 3x meals from the dining facility. Dinner chow turned out to be pretty good too!